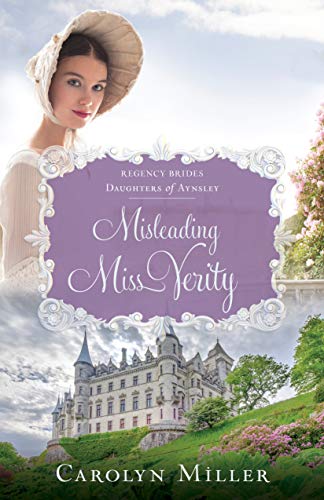 Carolyn Miller has been a favorite author since I first read The Elusive Miss Ellison, part of her Legacy of Grace series. The Regency England setting has endeared me to this author. She captures it perfectly. Her heroes and heroines are interesting and not typical. Verity is no exception.

With her two sisters safely married off, Miss Verity Hatherleigh, being the third daughter, feels out of place. She doesn’t fit the mold of a dutiful daughter, a lady. Somehow she feels her parents wanted her to be a son and heir. So, in being an original, she sometimes goes a bit too far. Hence, she is sent to her Grandmother’s as a kind of exile. Soon she finds herself in the wilds of Scotland at a schoolfriend’s house, a rectory near a laird’s estate.

The Laird of Dungally’s estate is all that fairytales are made of. It’s run down and mysterious, with a priest’s hole, unkempt gardens and rumors of a hidden tunnel. Anthony Jardine has just inherited Dungally and is not prepared for what he finds. The house and grounds are in disrepair, the tenants are in dire straits and an old rivalry rears it’s ugly head. He has ideas on how to improve the situation but wants to be known for himself not his station in life. This is why he is Misleading Miss Verity, along with the inhabitants of the town. Verity does some misleading of her own. She doesn’t want to be known as a lady, just a girl on her own merits.

Ms. Miller populates her story with unique characters such as cranky and nosey housekeepers, siblings of Verity’s friend and a steward who challenges the Laird to do the right thing. There are obstacles to overcome and God’s Grace to find. Ms. Miller wraps up this series with an exciting ending. Faith is the underpinning in this delightful tale.
*I borrowed this book from the public library. All opinions are my own.*

BackCover Blurb:
Verity Hatherleigh has a mind of her own—but her actions do not impress her viscount papa. When she gets into one scrape too many, he sends her off to the wilds of Scotland to rethink her headstrong ways.

Anthony Jardine relished his role as curate, but his new duties as laird of Dungally aren’t always to his liking. Though he thought his new inheritance would be a blessing, somehow he’s finding nothing but trouble on these estates. And the intelligent, compassionate, feisty lass who was sent to rusticate in his territory is one of the biggest problems. He’s falling in love with her, but she doesn’t share the faith that’s his foundation—not to mention he’s been lying to her about who he really is. For the truth-loving Verity, that may be unforgivable.

The tangled web these two have woven may spell disaster for their happiness—and for the tenants of Dungally.