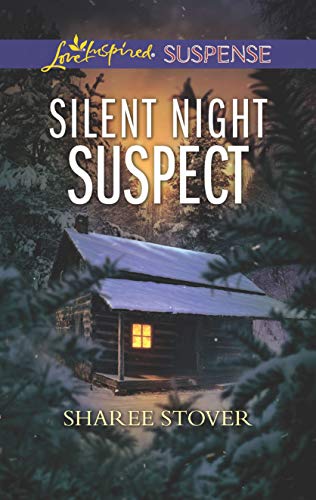 Asia Stratton, while still dealing with her estranged husband’s death, is suddenly the prime suspect in the murder of a powerful drug cartel leader. Her former high school sweetheart, Nebraska state trooper Slade Jackson, has always been known as a rule follower, but they must take extreme measures as his desire to prove Asia’s innocence puts both of their lives in danger.

This is my first book by Sharee Stover, but it won’t be my last! Sharee Stover shares the message that God is always there for us, even during our deepest struggles and the times when we carry our heaviest burdens. Silent Night Suspect leaves readers with hope through God’s endless grace and mercy.

The brief flashbacks of Asia’s past relationship with Slade make the romantic aspect of their storyline seem both realistic and believable, and I wish that more flashbacks of their shared history could have been included. Silent Night Suspect is a stand-alone novel, but I would love to see a story about Slade’s brother Trooper Trey Jackson in the future. Trey’s commitment and loyalty to his brother allow him to stand out as a secondary character in the novel, and it would be wonderful for Trey to get a chance to shine in his own story.

For readers who enjoy books by romantic suspense authors such as Lynette Eason, Dani Pettrey, Lynn H. Blackburn, and Irene Hannon, I recommend adding Silent Night Suspect to your list of books to read this holiday season.
*I received a complimentary copy of this book from the author/publisher and was not required to write a positive review. All opinions expressed are mine.

This story has one of my favorite tropes: old friends to current loves. Not only were Slade Jackson and Asia Stratton childhood friends, they were high school sweethearts.

The story starts out with an impossible situation. “Asia Stratton’s gaze remained transfixed on the lifeless eyes staring back st her.” That grabbed my attention! Asia awakens to find herself facing a dead man and she is holding a gun. Her old friend, state trooper Slade Jackson is shouting at her to drop the gun! Who can she trust? She feels as if God has abandoned her. There are many twists, turns and high octane excitement to follow. Several people are after her and an object she is supposed to have. Will the clues fall in place or do they become more complicated?

If you like riveting Christian Romantic Suspense that is out of the ordinary, then this is the story for you.
*I received a complimentary copy of this book from the author. I was not required to give a favorable review. All opinions are my own.*

Back Cover Blurb:
Suspected of a crime she knows she didn’t commit…

All she wants for Christmas is to remember.

Blood on her blouse. A gun in her hand. A cartel leader’s dead body in front of her. Widow Asia Stratton can’t remember what happened—just that she’s been framed. The only way to prove her innocence is to work with her ex-sweetheart, Nebraska state trooper Slade Jackson. But can they clear her name before this Christmas turns even deadlier?