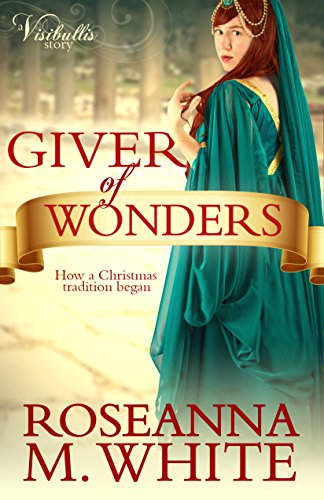 "Yours is not to live the life of an invalid, Cyprus, not today. Yours is to know the power of God."

Young Cyprus Visibullis has never known such fear; falling from a rooftop while frantically trying to escape her would be pursuers, Cyprus awakens to paralysis and two pairs of very concerned eyes. One pair issues her a gentle command that will change the course of her life forever, "get up and walk". The "wonder worker" of Patara, Lycia has harnessed the mighty power of the Holy Spirit and healed her.

Years pass as Cyprus and her twin sisters mature into very lovely young women with bright futures and secure betrothals. Their father, a famed local merchant with seemingly endless resources, is determined to have his daughters marry into wealth. Openly pagan, Dorus Visibullus indulges his wife's faith upon occasion, but publicly insists that the wealthy Nikolaos, son of Ephanius, should forsake his intentions of priesthood and seek engagement to his daughter, Cyprus. Faithfully by the side of his cousin, is Petros, son of Theophanes, an aspiring lawyer, who becomes clearly enamored with the raven haired beauty.

When tragedy strikes and the Visibullus family loses all they hold dear, Dorus curses the God of his youth and insists that only gold raining down from the heavens will save his family from ultimate ruin. Savor this intensely beautiful and romantic story with a depth of spiritual undertones that are clearly inspired; reminding all of us, maybe for the first time, that the beloved Saint Nicholas of the fourth century church was indeed a "giver of wonders".

*I received a copy of this book from the author. The opinions stated above are entirely my own

BackCover Blurb:
A miracle once saved her life ~ will another give her a future?

Cyprus was little more than a child when a fall left her paralyzed...and when the boy known as the wonder-worker healed her. Ever since, she has wondered why the Lord spared her, what he has in store for her. But her pagan father thinks she was spared solely so she could be introduced to the wealthy wonder-worker, Nikolaos.

Nikolaos has never questioned that his call in life is to dedicate himself to the church and to God. Never, that is, until he and his cousin Petros meet the compelling Cyprus Visibullis. For years he struggles with the feelings she inspires...and with the sure knowledge that Petros loves her too.

Petros knows he will never be good enough for Cyprus's father to consider him as a match for his favorite daughter not as long as Nikolaos is there. But when tragedy strikes the Visibullis family, he will do anything to save his beloved. Unfortunately, his beloved is determined to do anything to save her sisters ~ even at the cost of herself.

As the festival of lights bathes their Greek city in beauty, Cyprus, Petros, and Nikolaos celebrate the miracle of their Savior s birth together one last time. And in remembrance of their Lord's greatest gift, one of them will make the ultimate sacrifice for the others...and a centuries-long tradition will be born.