THE END OF THE MAGI by Patrick W. Carr, Reviewed by Rebecca Maney 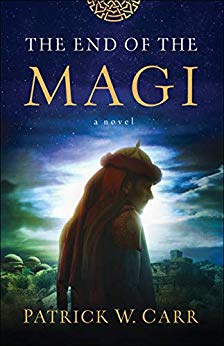 "From the time the word goes out to restore and rebuild Jerusalem until the Anointed One, the ruler, comes, there will be seven 'sevens' and sixty-two 'sevens'." Daniel 9:25

Counting the years. Counting the months. Magis meticulously counted the days until the promised Messiah would come, according to the prophet Daniel. When a magnificent star appears in the sky, a young magi acolyte dreams of such a star, with a voice calling out to him saying, "I am". Then tragedy strikes and Myrad is forced to run for his life following the death of his adoptive father; his physical handicap making the journey all the more difficult as he trudges across the Parthian desert. Miraculously, he gains favor with a wealthy merchant, thus launching the beginning of the "end of the magi".

Intriguing barely scratches the surface of this story, for the author's imagination takes over much of what we don't know about the famed biblical visitors, and skillfully weaves in the known; resulting in a tale that is not only believable, but fascinating. Readers well versed in ancient history will find the story much easier to understand, but those who are not will feel sufficiently schooled.

Rising above it all is the reassuring truth that God can even use a "club footed Persian boy"to accomplish His purposes; for "it's almost as if God takes delight in accomplishing His ends in the most unlikely way possible. . . . . . (His) promises are sure, whether they come sooner or later." In spite of this being a more difficult than average book to read, its impact will remain unforgettable. 3.5 stars

BackCover Blurb:
Following his vision of the coming Messiah, the prophet Daniel creates a select group of men who will count down the calendar to the arrival of Israel's promised king. Centuries later, as the day nears, Myrad, a young magi acolyte, flees for his life when his adoptive father and others are put to death by a ruthless Parthian queen.

Having grabbed only a few possessions, Myrad escapes the city, and searching for a way to hide from the soldiers scouring the trade routes, he tries to join the caravan of the merchant Walagash. The merchant senses that Myrad is hiding secrets, but when the young man proves himself a valuable traveler, an epic journey filled with peril, close escapes, and dangerous battles begins.

With every day that passes, the calendar creeps closer to the coming Messiah. And over everything shines the dream of a star that Myrad can't forget and the promise that the world will never be the same.