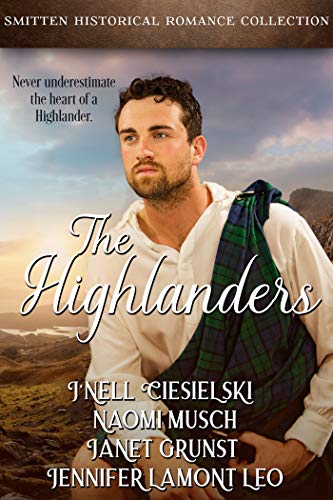 The Highlanders is a collection of novellas by four authors.

NIGHT FOX by J’nell Ciesielski. The Night Fox steals from the rich to pay the unjust debts her gambling father left. Who could it be? Deven McLendon is newly returned from the war and seeks to restore his family’s property but encounters a rogue— the Night Fox. Will things change when he finds out the Fox’s identity? Deftly written hero and heroine and a dastardly villain. All in a wonderful historical Scottish setting. Great fun!

A TENDER SIEGE by Naomi Musch. A wounded Scotsman rescued by an Indian maid who is a trapper’s widow. Will Lachlen survive his injury and will Wenonah fend off the advances of a warrior who killed her husband? Ms. Musch has written a story of early America that tugs at your heart strings. The beautiful descriptions of the woods and early wilderness life are spellbinding. This is one of my favorite eras to read about and it rings true.

THE YEAR WITHOUT SUMMER by Janet Grunst. A bonnie tale of the harsh summer of 1816 in Scotland and the personal tale of Grant Cummings, his brother and Aunt Katherine and their struggle amid diminishing opportunities. Summer proved hard for many including Molly McGregor and her brother Scott. See how the author fashions hope out of adversity.

THE VIOLINIST by Jennifer Lamont Leo. Callen McTavish is just a crude lumberjack-or is he? Callen has been dealt a big blow but still longs to return to his home in Scotland. Rose is an accomplished violinist but had to leave a life of culture in Chicago when her heart was broken. Now she lives with her sister and brother-in-law, hoping to make a living as a music teacher in Idaho. Shunning the matchmaking of he4 sister, Rose befriends Callen, who shares her love of music. Based on a twist of real history, Ms Leo crafts a warm and welcoming story, showing that with God’s leading- bad memories can be overcome.

*I was given a complimentary copy of this ebook by the author. I was not required to give a favorable review. All opinions are my own.*


BackCover Blurb:
Never underestimate the heart of a Highlander.

Night Fox
After the failed Jacobite Rebellion of 1715, war-weary Deven McLendon returns home to discover a thief creating chaos on his lands. But this thief isn't like any other. When Rooney Corsen sets out to steal jewels to repay her family’s debts and keep a roof over her little sisters’ heads, never does she imagine snagging the laird's heart instead.

A Tender Siege
Pontiac’s War, August 1763: “I beg Ye to take me.” Wounded in battle in the American wilderness, Lachlan McRea of His Majesty’s 42nd Highlanders pleads with God, yearning to be reunited with his lost wife and child. As death hovers near, he is discovered by Wenonah, a native widow doing all she can to survive alone while avoiding the attentions of a dangerous Shawnee warrior. In aiding one another, their perils increase. If Lachlan can let go of the woman he once loved, he might find healing for both body and soul.

The Year without Summer
Shoved off his family’s land in Scotland in 1816, Grant Cummings looks for work in Ulster, Ireland. He needs money and a home to raise his young brother. Molly MacGregor loses her father and his income, but she has no time to grieve as she sews and spins to earn enough to keep her and her young brother alive. Renting out the hut on their land might be the answer, but only if she can overcome her prejudice against the handsome Highlander who moves in. Her heart might soften toward him, but not when he plans to set sail for America.

The Violinist
In 1915 Idaho, homesick lumberjack Callan MacTavish despairs of ever seeing his Scottish homeland again. With kindness and patience, music teacher Rose Marchmont reaches a part of Callan’s heart he’d long ago locked away. She sees beyond his rough exterior to the artistic heart beneath. He longs for more than he can offer her, but she doesn’t know about the secret trauma that keeps him from crossing the sea.

Available in digital ebook, and paperback:
Buy The Highlanders at Amazon