THE BOOK OF LOST FRIENDS by Lisa Wingate, Reviewed by Rebecca Maney 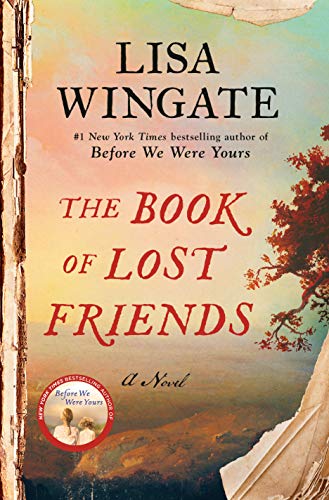 "Sad thing when stories die for lack of listenin' ears."

Goswood Grove has myriads of stories begging to be released from beneath its former magnificence; they lie suffocating under covered furniture, imposing family portraits, and dusty tomes, for who is brave enough to search for them, much less tell them? Might a determined first year teacher, arriving in a town with so much blended ethnicity that everyone just might be kin to everyone else, be able to release the words in all their glorious ugliness and hopefulness, simply by inspiring her students to revel in the truth of their heritage? It's a challenge that she's willing to take.

This isn't just a book, it's a volume of history. It's a story with a life of its own; living and breathing through the voices of its characters. It's injustice personified. It's divine providence recognized. It's hope. It's glory. It's life in American as it once was and by the grace of God Almighty will never be again. It's the "best of times". It's the "worst of times". It's time for the "book of lost friends" to be opened.

"We die once when the breath leaves our bodies. We die a second time when the last person speaks our name." . . . . . "I remember you."

BackCover Blurb:
From the #1 New York Times bestselling author of Before We Were Yours comes a new historical novel: the dramatic story of three young women searching for family amid the destruction of the post–Civil War South, and of a modern-day teacher who learns of their story and its vital connection to her students’ lives.

Bestselling author Lisa Wingate brings to life startling stories from actual “Lost Friends” advertisements that appeared in Southern newspapers after the Civil War, as newly freed slaves desperately searched for loved ones who had been sold away.

Louisiana, 1875: In the tumultuous era of Reconstruction, three young women set off as unwilling companions on a perilous quest: Hannie, a freed slave; Lavinia, the pampered heir to a now destitute plantation; and Juneau Jane, Lavinia’s Creole half sister. Each carries private wounds and powerful secrets as they head for Texas, following roads rife with vigilantes and soldiers still fighting a war lost a decade before. For Lavinia and Juneau Jane, the journey is one of stolen inheritance and financial desperation, but for Hannie, torn from her mother and siblings before slavery’s end, the pilgrimage west reignites an agonizing question: Could her long-lost family still be out there? Beyond the swamps lie the limitless frontiers of Texas and, improbably, hope.

Louisiana, 1987: For first-year teacher Benedetta Silva, a subsidized job at a poor rural school seems like the ticket to canceling her hefty student debt—until she lands in a tiny, out-of-step Mississippi River town. Augustine, Louisiana, is suspicious of new ideas and new people, and Benny can scarcely comprehend the lives of her poverty-stricken students. But amid the gnarled live oaks and run-down plantation homes lie the century-old history of three young women, a long-ago journey, and a hidden book that could change everything.