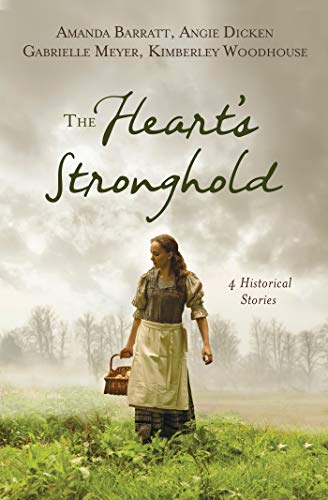 Four novellas that peek into history in Colonial America.

VIRGINIA COMPANY BRIDE by Gabrielle Meyer. James Fort At Jamestown, Virginia. 1608
The author shows how difficult and dangerous life was at the beginning of the colonization of our country. Anne Burras is the only non-native woman in Jamestown. Hardships and dangers are made real as Anne decides whether to return to England or choose a husband.

EMBERS OF HOPE by Kimberley Woodhouse. Castle Island, Massachusetts. 1673
A small island guards Boston in 1763. The troops are commanded by Captain Christopher Latham. Building a new fort brings stone mason Samuel Howland, his son, Sam and daughter, Esther. She is the only woman among many men and thought to be a curse. Calamities in the past have fed this superstition of women bringing bad luck. Ms. Woodhouse spins a great tale of how all this impacts the garrison on the small island.
Christopher and the Howlands faith in God help them dispel the myth, the senior Howland uses his knowledge of the Bible to mentor some of the men, thus fulfilling The Great Commission.

A TREATY Of TULIPS by Angie Dicken. Fort Burnet, Oswego, New York. 1740
Sweet, romantic story with elements of mystery. Sabine Van Der Berg has grown up among the natives and is fond of them. When Lieutenant Jacob Bennington arrives, he has much to learn to be able to govern and fit in. A story of new beginnings and great, meaningful traditions. Fascinating facts about Dutch settlers.

A PROMISE FOR TOMORROW by Amanda Barratt. Kentucky 1778
A fun look at what Boonesborough Fort might look like during the time Daniel Boone himself was present. Widow Rosina Whiting and Captain Silas Longridge live in perilous times in early frontier Kentucky, encountering dangerous Indians and a ferocious battle. Ms. Barratt captures the atmosphere of hard living and fierce encounters.
This quartet feeds my hunger to know what it was like in our history. One thing stood out to me: Those ladies had so much to do without any of our modern conveniences and proper lighting at night. How did they get it all done!
*I received a complimentary copy of this book from one of the authors. I was not required to give a favorable review. All opinions are my own.*

BackCover Blurb:
Love on the Edge of the Unknown
Join four brave women making their mark on history at Colonial forts. Faced with tragedy and distrust they will fight to bring civility, family, and love to the frontier.
Virginia Company Bride by Gabrielle Meyer
James Fort at Jamestown, Virginia, 1608
In September 1608, Anne Burras is the only woman in Jamestown when her mistress dies upon arrival. Laborer John Layton is one of only thirty-eight colonists who survived the first year in the colony. Both want Anne on the supply ship returning to England in three months, but neither foresee the difficulties they will face just to stay alive—or the painful sacrifices they will make to stay together.
Embers of Hope by Kimberley Woodhouse
Castle Island, Massachusetts, 1674
Castle William (which would eventually become Fort Independence)
With Castle William burned to ashes, a stone mason’s daughter is the only woman on an island of soldiers. But superstitions and rumors abound that she is bad luck for the island. The captain finds himself falling in love with her, but disaster seems to strike every time they make headway. Can these two find love and hope in the midst of the ashes?
A Treaty of Tulips by Angie Dicken
Fort Burnet in Upstate New York, 1740
Daughter of a Dutch trader, Sabine Van Der Berg is loyal to their land at the trading post and also to her friends, the native Iroquois. When a British lieutenant arrives to expand the post to a fort, not only is Sabine key in keeping the peace for British-Iroquois trade, but she must protect her heart from a man who threatens the only way of life she’s ever known.
A Promise for Tomorrow by Amanda Barratt
Fort Boonesborough, Kentucky, 1778
Pregnant widow Rosina Whiting seeks shelter at Fort Boonesborough after a harrowing journey. She doesn’t expect her heart to be swayed by enigmatic frontiersman Captain Silas Longridge. But will the dangers that await sever their newfound love?