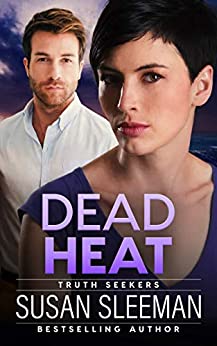 Susan Sleeman is one of my go-to authors when I’m in the mood for a romantic suspense story. Her books are always riveting and action-packed, and they keep me guessing to the end. Sleeman’s characters are always well-crafted, realistic, and engaging. Dead Heat is no exception and is a wonderful addition to the Truth Seekers series. Nick Thorn and Piper Nash are attracted to each other almost from the start, and it was amusing to see them navigate the case while trying to keep the attraction from showing. I especially enjoyed seeing Nick pulled out of his IT world by his association with Piper.

Sleeman always astounds me with her depth of knowledge about criminal investigation. Her research is detailed and thorough, and the characters have different jobs in the field, so it’s interesting to learn all about them. With lots of intrigue and suspense, twists and turns, a heaping serving of romance, and a dash of inspiration, this book should appeal to those who enjoy a great suspense novel. Although it’s part of a series, it can be read as a standalone. Many of the characters from previous books make an appearance in this one, so that adds an element of fun. 4.5 stars
*I voluntarily reviewed a complimentary copy of this book. All opinions are my own.

BackCover Blurb:
Tracing cyber criminals is what he lives for…

When hackers breach hospital security to steal patient records and begin blackmailing them, Veritas Center’s cybercrime expert, Nick Thorn is hired to locate security holes and patch the system. But he doesn’t stop there. He wants to bring down the hacker and make her pay. Problem is, he inadvertently inserts himself in FBI Agent Piper Nash's sting to catch the same hacker, and Piper has no choice but to arrest him and force him to stand down.

But the job is suddenly hitting too close to home.Nick finds himself attracted to Piper and wants to comply, but when his grandmother falls prey to a cyber-attack by the same hacker, he takes the assault very personally and will stop at nothing to find the hacker. Not even stop for Piper’s warnings to take care. They’re in a dead heat to the finish line, but what Nick doesn’t realize is the hacker has no intention of going to jail, and she’s reserved a bullet with Piper’s name on it. With time ticking down can Nick partner with Piper to find the killer before a point-blank shot takes her out?