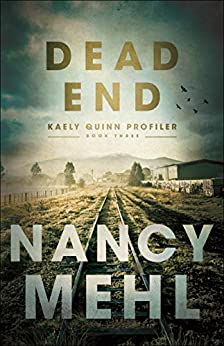 Nancy Mehl takes us deeper into the life of FBI agent Kaely Quinn in this third book of her profiler series.

There is never a chance to get bored reading about this interesting character. Kaely has a strong faith but still struggles with unresolved issues concerning her father who is incarcerated. Ms. Mehl has done an admirable job of portraying her subjects as real, conflicted as they are. There are many layers to them that show us why they behave as they do.

Kaely is still reeling from her last case and surfs the Net for possible drug related cases. She comes across a breaking news article that brings back the awful memory she has of her father, a serial killer. She is afraid it could be happening again. To her surprise, she and her partner Noah Hunter are approached by the DeMoines Chief of Police and she is facing the possibility of confronting her father. Noah cares for Kaely but is scared as she regularly puts her life in danger. She is a Christian but is finding it hard to see the Will of God in the whole picture. They come to realize that they are fighting not only flesh and blood but evil forces behind evil people.

Exciting and complicated, this story leaves you guessing at times and comes to a fascinating conclusion, with the principal players stronger and more resilient.

Can’t wait to see what Nancy Mehl comes up with next!
*I received a complimentary copy of this book from Bethany House on behalf of the author. I was not required to give a favorable review. All opinions are my own.*

Backcover Blurb:
When a body is discovered in a field in Iowa, the police uncover fourteen additional corpses ranging from 20 years old to recent. The remains point to a serial killer with an MO the authorities have seen before--Ed Oliphant, a man who has been in prison for over 20 years . . . and is Special Agent Kaely Quinn's father. After several failed interview attempts to discover if Ed has been training someone to be a copycat killer, the police turn to Kaely in St. Louis.

Kaely promised herself she would never step foot in her hometown or set eyes on her father again. She's always refused to confront her past, but if she wants to prevent any more deaths, she must come face-to-face with the man she's hated for years.
As more bodies are discovered, Kaely races against time and her own personal turmoil to uncover the killer. Will this most personal case yet cost Kaely her identity and perhaps even her life?