COLORS OF TRUTH by Tamera Alexander, Reviewed by Rebecca Maney 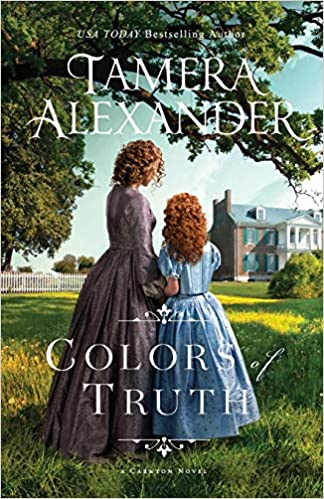 "Before she left Ireland, she'd thought she understood what it meant to be alone. To be left behind. But she hadn't. Until now."

Traveling all the way to Franklin, Tennessee from the Irish countryside with a "wee corker" of a seven year old sister and some money set aside for new beginnings, Catriona O'Toole is searching for two things; her twin brother, Ryan, conscripted into the Confederate Army upon arrival to America, and concrete answers to a generational land dispute between the O'Tooles and the McGavocks. One question is answered rather quickly, comparatively speaking, but the other unknown fact forces Catriona and her sister Nora to face rather troubling circumstances, along with a slew of inaccurate accusations, and the charming smile of the newly acquired Carnton overseer, a Mister Wade Cunningham. . . who seems to show up everywhere . . . that she is.

Secret Service Agent Wade Cunningham is walking a fine line; posing as a former Confederate soldier, which he most definitely was not, he applies for an advertised position at the famed Carnton property owned by Mister John McGavock; Wade's sources have led him to believe that a notorious counterfeiting ring is operating in the vicinity. Ingratiating himself with one of the most respected members of the Franklin community seemed like a really good idea, but having his head turned by not one, but two red headed Irish females, was not anywhere in the plan. Especially when he is certain that Catriona O'Toole is up to her pretty eyeballs in secrets, but can he blame her? So is he.

One might be tempted to conclude that Catriona and Wade's journey to wholeness is fraught with far too many insurmountable obstacles, for even Wade muses, "How could someone who inflicted so deep a wound on your heart still manage to possess a piece of it?". But the hand of the Almighty God is at work, using truth as a balm rather than a battering ram. Leave it to Tempy to offer Catriona these words of sage wisdom, "Way I figure it, one way or the other, give it enough time, and the truth always has its say", just as the final Word promises us that "the truth will set us free".

*4.5 stars. I purchased this book and was under no obligation to provide a review.

BackCover Blurb:
In a town battered and bruised by war, one woman embarks upon an impossible search--and one man must face the past in the very place that almost destroyed him. Tennessee, 1866. According to the last letter Irish immigrant Catriona O'Toole received from her twin brother, Ryan, he was being dispatched to Franklin, Tennessee, where--as a conscripted Confederate soldier--he likely endured the bloody Battle of Franklin that claimed the lives of thousands. Catriona leaves behind the lush green of their Irish homeland in search of him, with nothing to her name except the sum of cash Ryan sent to their family. Now the sole provider for her seven-year-old spitfire sister, Nora, Catriona hopes to reunite the siblings--the only surviving members of their devastated family.
Wade Cunningham is a former Federal soldier who now works for the newly formed United States Secret Service and is trying to uncover counterfeiting rings in the postwar South. In order to infiltrate their sophisticated enterprise, he must pose as a former Confederate in Franklin--a town where counterfeit greenbacks run rampant. When Wade meets Catriona, he is immediately intrigued by her and the little redheaded scamp in her care--but what he doesn't anticipate is that the cash in Catriona's possession is some of the most convincing counterfeit money he's ever seen. Soon the object of Wade's affection is also the suspect in a major crime--one he's expected to prosecute.
With rich historical detail and multifaceted prose, USA TODAY bestselling author Tamera Alexander tells a riveting tale of truth, betrayal, and unlikely romance that unveils the many shades of God's perfect redemption.
Available in digital ebook, paperback and audiobook:
Buy Colors of Truth at Amazon
Buy Colors of Truth at Christianbook.com