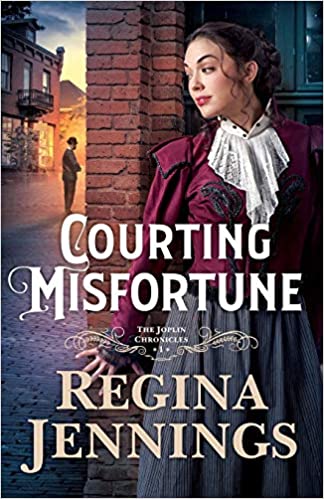 "Callista had been warned that Saturday night in Joplin was unlike anywhere else in the world."
Travelling back to her hometown of Joplin, Missouri put Pinkerton operative Callista York in a precarious position. People would most certainly recognize her, but unfortunately not version of "her" that she was pretending to be. Callista's mission was crystal clear; find the missing mob boss' daughter as quickly as possible, safely extract the subject, thus securing her job with the famed detective agency. Wouldn't you know it? In a comedic twist of fate, she runs straight into a preacher man trying to save her soul from perdition, on her very first foray into Joplin's dens of iniquity.
"Matthew had been warned about Saturday night."

Fortunately or unfortunately, Matthew hadn't been warned about beautiful women pretending to be "professional decorators" in one place and "nurses" in another. Callista York was up to her pretty little neck in tall tales, but why? Being a missionary in a place like Joplin was already more that Matthew Cook had bargained for, now he was worrying and wondering about dark curls and lovely eyes and . . . . . just who is she anyway? Callista is related to half the town.

Enjoy this delightfully entertaining story of "handsome-wholesome" meeting "spunky-sparky", for when matters of the heart rise to the surface, and unforeseen danger rounds the corner, Callista and Matthew succumb to a partnership which they sadly realize can't possibly end in a happily ever after scenario. For "the same God who compels you to declare freedom to the captives has given me the task of freeing a very specific captive. There's no difference." . . . . or so she thinks.

*I purchased this book and was under no obligation to provide a review.
BackCover Blurb:
Calista York needs one more successful case as a Pinkerton operative to secure her job. When she's assigned to find the kidnapped daughter of a mob boss, she's sent to the rowdy mining town of Joplin, Missouri, despite having extended family in the area. Will their meddling expose her mission and keep Lila Seaton from being recovered?

When Matthew Cook decided to be a missionary, he never expected to be sent only a short train ride away. While fighting against corruption of all sorts, Matthew hears of a baby raffle being held to raise funds for a children's home. He'll do what he can to stop it, but he also wants to stop the reckless Miss York, whose bad judgment consistently seems to be putting her in harm's way.

Calista doesn't need the handsome pastor interfering with her investigation, and she can't let her disguise slip. Her job and the life of a young lady depend on keeping Matthew in the dark.
Bethany House Publishers, December 2020
Available in digital ebook, paperback, hardcover and audiobook:
Buy Courting Misfortune at Amazon
Buy Courting Misfortune at Christianbook.com