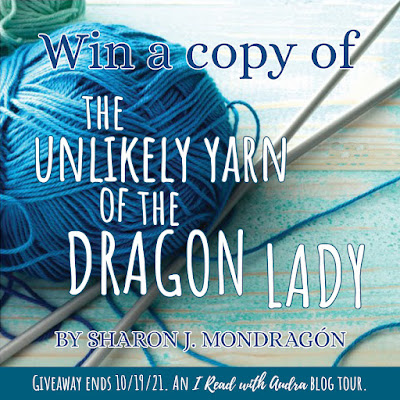 TRIXI'S REVIEW:
The Unlikely Yarn of the Dragon Lady by Sharon Mondragon

First, that title made me look twice. Second, I read the back cover blurb. After that, I just knew I had to read this story! It's one that drew me in very quickly and kept me turning pages. 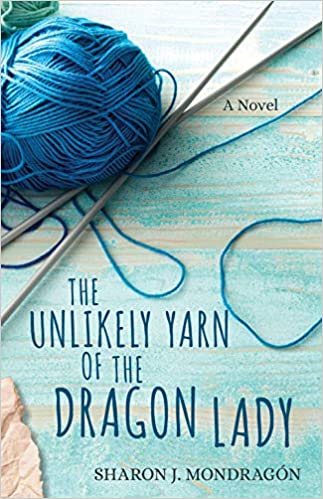 I've never heard of a prayer shawl ministry before, so learning about it through the lives of Margaret, Jane, Rose and Fran was quite interesting. These four ladies are different in personality and how they approach life, but their heart for wanting to comfort those who are hurting bonds them together. God definitely used each one of them to touch the lives of those who would never step foot into a church and showed the love of Christ. When Father Pete kicked them out of the Prayer chapel to go knit in public places, that's where this story really begins! Not only did they touch the lives of strangers, God began to work in each one of their hearts to deal with some heavy things they've each tried to bury.
Margaret was most like me, so I especially loved seeing her transformation! She's the groups' self-appointed leader who's also a bit of control freak. In spite of her supposed hard-heart, I learned of the reason behind it when the author penned her backstory. Each one of these ladies had a backstory that was emotional and just endeared me even more to them.
Throughout the book I laughed, cried and felt like I made some friendships along the way myself. It has some definite spiritual truths that resonated in my own heart. I don't read women's fiction often, but this one was especially fun, adventurous, life-changing and emotional.

What a lovely debut novel, Sharon Mondragon is one to watch for!
*I received a complimentary copy from Kregel publishing through the Read with Audra blogger program. I was not obligated to leave a favorable review; all opinions expressed here are mine. *

Margaret, Rose, Jane, and Fran had a good thing going: meet every week in the quiet of their peaceful chapel and knit prayer shawls. No muss, just ministry. That is, until their pastor boots them out of the church in his last-ditch effort to revive the dwindling congregation.

Uptight Margaret isn’t having it. Knitting prayer shawls where people can watch is the most ridiculous idea she’s ever heard of, and she’s heard plenty. Prayer belongs in the church, not out among the heathen masses. How are they supposed to knit holiness into these shawls if they’re constantly distracted by the public? But with no choice, the others embrace the challenge. They pack their knitting bags and drag Margaret—grumbling the whole way—to the mall with them. She can’t wait to prove them all wrong when it fails miserably, and show the pastor that she always knows best.

Without the familiar mold the group has been stuck in, their own losses, pain, and struggles rise to the surface. And the people and situations they encounter every time they try to sit quietly and knit are taking them a lot further out of their comfort zone than they ever imagined. Can they find the courage to tackle the increasing number of knotty issues they learn about in the community--or will the tangle be too much to unravel?

Sharon J. Mondragon’s debut is warm and delightful, full of real laughter, grief, and personality. It beautifully illustrates the power of women across generations to reach people for Christ.
To read an excerpt of The Unlikely Yarn of the Dragon Lady click here.

From Kregel Publishing, Sept, 2021 - Buy the digital ebook or paperback at Amazon
About the Author:
Sharon J. Mondragón writes about the place where kindness and courage meet. Her debut novel, The Unlikely Yarn of the Dragon Lady (originally titled The Heavenly Hugs Prayer Shawl Ministry) was the 2017 winner of the American Christian Fiction Writers Genesis award in the Short Novel Category, and she has also been recognized by The Saturday Evening Post where her short story, “I’ll Be Home for Christmas,” was an Honorable Mention Awardee in the 2014 their Great American Fiction Contest. 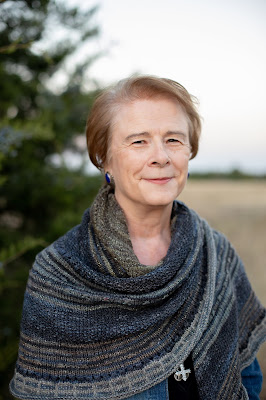 Mondragón has been active in prayer shawl ministry since 2008 and currently serves as facilitator for the prayer shawl ministry at her church, St. Paul Episcopal in Waxahachie, TX. She also knits with the Circle of Healing at Red Oak United Methodist Church. She is a Level 2 Certified Knitting Instructor through the Craft Yarn Council and teaches beginning knitting at a local yarn store.

Mondragón is the mother of five grown children and has four grandchildren. After 26 years as an Army wife, she has settled in Midlothian, TX with her hero/husband, her laptop, and her yarn stash.

a Rafflecopter giveaway
Posted by Debra E. Marvin at October 01, 2021