THE SIREN OF SUSSEX by Mimi Matthews, @Austenprose Tour with #Giveaway, Review by Debra Marvin

THE SIREN OF SUSSEX, BELLES OF LONDON Book One
Victorian high society’s most daring equestrienne finds love and an unexpected ally in her fight for independence in the strong arms of London’s most sought after and devastatingly handsome half-Indian tailor.

Evelyn Maltravers understands exactly how little she's worth on the marriage mart. As an incurable bluestocking from a family tumbling swiftly toward ruin, she knows she'll never make a match in a ballroom. Her only hope is to distinguish herself by making the biggest splash in the one sphere she excels: on horseback. In haute couture. But to truly capture London's attention she'll need a habit-maker who's not afraid to take risks with his designs—and with his heart.

Half-Indian tailor Ahmad Malik has always had a talent for making women beautiful, inching his way toward recognition by designing riding habits for Rotten Row's infamous Pretty Horsebreakers—but no one compares to Evelyn. Her unbridled spirit enchants him, awakening a depth of feeling he never thought possible.

But pushing boundaries comes at a cost and not everyone is pleased to welcome Evelyn and Ahmad into fashionable society. With obstacles spanning between them, the indomitable pair must decide which hurdles they can jump and what matters most: making their mark or following their hearts? 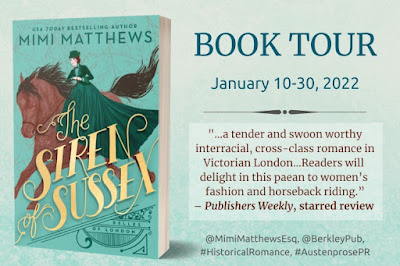 DEBRA'S REVIEW:
When I begin a Mimi Matthews story, I expect to be highly rewarded. After all, I’ve never been disappointed. Is it trite to say that her stories transport me? (They do, but that’s supposed to be the point of fiction and, for me, the draw of historicals… I want a long trip!)

Not only is the cover of “The Siren of Sussex” an immediate eye-catcher for style and color--and of course, that horse and that riding habit—but the title is a surprise. A siren, you say?

Now, I admit that I listened to the audiobook and I know that gives any story an advantage when narrated well (they aren’t all, sadly), but this truly was an effort in self-control. I did not listen to it at bedtime because I do need to sleep. The narrators were excellent. But from the start Evelyn Maltravers and her goal (how I love a practical heroine) grabbed my heart. And did I mention the horse? The details in the clothing design and creation?

We knew where this was going the first moment Evelyn heard the voice of the man behind the curtain. And what a hero! Ahmad Malik fits in nowhere, so he makes his own place in society. Even so… this can’t end well…

I’ve authored a few stories of my own, and I can say that my greatest compliment to any novel is that twinge of both fascination and jealousy at an astoundingly clever plot. Evelyn’s need of a wardrobe that would catch the attention of a suitor and Ahmad’s need to have his fashion creations displayed around town did indeed make for a good partnership. And what else could they have? Certainly not a romance or at least a happy ending? There were parts of this story where I had to stop listening because I was so emotionally caught up in ‘waiting for the other shoe to drop’…. Again, that ‘this can’t end well’ feeling. How does an author do that so convincingly even when we know it will. Ms. Matthews shows us how.

Marketed as historical fiction, I'll note here that The Siren of Sussex is not from a Christian Fiction publisher. However, Mimi Matthews is a fan favorite among that particular audience for both her skill and that lack of graphic romance… what we call ‘clean fiction’. However, the glances, the light touches, the emotions were about as clean-steamy as one could find!

If you’re a fan of Victorian fiction, the mix of ‘haves and have-nots’, London society, fashion details, horsemanship (a girl and her horse! right?) and being swept away in a story, I strongly recommend “The Siren of Sussex”. I’m in line for book two.
**I'm adding this note from the author: "Why did I include a plot thread about Victorian Spirtualism in Siren? In my novels, I write about real history. It doesn’t mean I endorse the beliefs or practices; it simply means they were a historical fact. In Siren’s case, the spiritualism plot thread served two very particular purposes (both directly related to class crossing)."

USA Today bestselling author Mimi Matthews writes both historical nonfiction and award-winning proper Victorian romances. Her novels have received starred reviews in Publishers Weekly, Library Journal, Booklist, and Kirkus, and her articles have been featured on the Victorian Web, the Journal of Victorian Culture, and in syndication at BUST Magazine. In her other life, Mimi is an attorney. She resides in California with her family, which includes a retired Andalusian dressage horse, a Sheltie, and two Siamese cats.
WEBSITE | TWITTER | FACEBOOK | PINTEREST | BOOKBUB |
GOODREADS

Don't forget to enter the giveaway Rafflecopter below!
ADVANCE PRAISE
“…a tender and swoon worthy interracial, cross-class romance in Victorian London…Readers will delight in this paean to women’s fashion and horseback riding.”— Publishers Weekly, starred review

“Matthews brings the Victorian era to vivid life with meticulously researched details and an impossible romance made believable and memorable.”— Booklist, starred review

“Matthews deftly underscores racial and gender discrimination in Victorian London in this excellent start to ‘The Belles of London’ series; rather than overshadowing, it propels the romance. Romance aficionados who love fashion and animals will delight in this tender romance and will be excited to see Evelyn’s friends in future installments.” — Library Journal, starred review

"Unflinching, tender, and moving, the delicately crafted The Siren of Sussex might just be my favourite work from Mimi Matthews; it certainly is one of my favourite historical romance reads this year."— Evie Dunmore, USA Today bestselling author of Portrait of a Scotsman

GIVEAWAY DETAILS
Mimi has generously offered a fabulous giveaway package: Terms & Conditions: Giveaway hosted by Mimi Matthews. No Purchase Necessary. Entrants must be 18 years or older. Open to US residents only. Void where prohibited.