TO TREASURE AN HEIRESS by Roseanna M. White, Reviewed by Winnie, Rebecca, and Paula 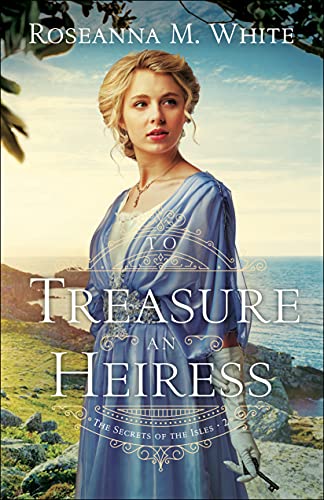 To Treasure an Heiress (The Secrets of the Isles Book #2) WINNIE'S REVIEW
What a delight it was to return to the Isles of Scilly in To Treasure an Heiress, the second book in Roseanna M. White’s newest series, The Secrets of the Isles. White never fails to draw me quickly into her stories and keep me engaged and turning pages. I now have a new favorite hero—Lord Theodore Sheridan, who kept me laughing with his sense of humor, easy-going good nature, and charming ways. He’s the perfect foil for Beth Tremayne, the adventurous, courageous, family-loving heroine. I loved the way he kept trying to break through her defenses, and the way their relationship changed and grew. White is master at creating colorful, realistic, engaging characters and building fascinating stories around them.
“Sheridan had never had a rival. It would keep life interesting. Perhaps he should invest in one sometime, just for the experience.”
“If God meant me to live in the desert, He wouldn’t have made me an Englishman.”
With a perfect blend of history, intrigue, suspense, romance, and inspiration, this book was highly entertaining and left me with an intense desire to visit the Isles of Scilly. I’m looking forward to the next tale in the series.
*4.5 stars I voluntarily reviewed a complimentary copy from Bethany House Publishing. All opinions are my own.
PAULA'S REVIEW:
I love the stories that Roseanna White pens. Her cast of characters takes center stage in the story of the other Elizabeth who was introduced in book one. Beth is in search of pirate treasure on one of the small islands of Scilly, off the coast of Cornwall. She has found clues to a legend of an ancestor and hopes that it more than a tall tale. Lord Theodore Sheridan, a hobby archeologist, is in the Islands with some friends. Theo is a favorite character who is totally taken with Beth. His internal thoughts are hilarious and break through to be spoken at an inopportune time. Another favorite is his valet Ainsley who tries to keep his master on the straight and narrow, dispensing advice and Godly wisdom. The banter is priceless.
I like the way Theo and his friends interact. They include everyone to puzzle out the mystery, females and servants alike. It was as if I were in the Library with them.
This is a story with a search for pirate treasure but also a realization that treasure takes many forms. The care that Beth takes in searching out the handed-down tales shows that there is treasure in remembering family and preserving the old stories.
There are so many things in this book: adventure, danger, villany, and lessons in humility, redemption, forgiveness and Godly living. Another sure winner and a top pick of the year.
*I received a complimentary copy of this book from Bethany House on behalf of the author. I was not required to give a favorable review. All opinions are my own.* Beyond 5 stars and a clear faith thread
REBECCA'S REVIEW:
. . .. "you're an heiress of the only thing that matters - an amazing family".
"And clearly the blow had knocked something loose in his head for him to have spouted that nonsense yesterday. What had he meant he wasn't going to propose? Why would he have? They barely knew each other." Fumbly, bumbly Lord Theodore Sheridan rarely made any sense, and in all honesty Beth Tremayne didn't expect him to, for she barely tolerated the man. But after rising to Beth's defense against a nefarious member of the Scofield family who was obviously trying to steal her treasure, she began sneaking peeks at the nerdy, geeky, titled explorer in a slightly different light. Just a little, mind you, just a little.
She was a dream come true, this island girl of his heart. Beth Tremayne loved adventure and digging in the dirt as much as he did; she just didn't like him... always muttering something about "stealing her box". He had paid for that box, thank you very much. But the more time they spent together trying to find hidden treasure, the more convinced Sheridan becomes that he has already found it.
Readers will absolutely adore returning to the Isles of Scilly, where they will happily reunite with beloved characters from the first installment in the series, while enjoying the opportunity to explore brand new relationships. The banter between Beth and Theo is totally worth the read, but don't be surprised at how much affection develops for some of the other members of this little island family.
"She actually liked him. She laughed in all the right places . . .  He caught her looking at him at odd moments. . . He'd convince her." Our dear Theo. Always the optimist!!!
*I received a copy of this book from the author and publisher. The opinions stated above are entirely my own. I also purchased a copy.
BackCover Blurb:
1906
Beth Tremayne has always been drawn to adventure. During her childhood, she fed that desire by exploring every inch of the Isles of Scilly. Now, after stumbling across an old collection of letters and a map buried on her family's property, she's found more adventure than she ever anticipated in the hunt for pirate treasure. But in order to discover where the clues lead, she must search alongside Lord Sheridan, a man she finds insufferable.

Sheridan has spent years pursuing whatever archaeological interests pique his imagination. And when he discovers that Beth's search connects with one of his far-removed pirate ancestors, he can't help getting involved. Plus, he finds her irresistible, even though she insists he stole a prized possession of hers.

As they work together following different clues and drawing closer to danger, they start to piece together a story of tragic love and piratical adventure. But which treasure will bring the greatest surprise--the one they find in each other or the one just out of their reach?
Bethany House Publishing, January, 2022
Available in digital ebook, paperback, hardcover, and audiobook:
Buy To Treasure an Heiress at Amazon, Christianbook .com, and Baker Book House
Posted by Debra E. Marvin at January 31, 2022