Since I’m reviewing a historical novel, and this past week was TV Land week here at the Inkwell, I can’t help but mention the television show that fostered my love for historical novels and history in general. Here Come the Brides.

Even though I was only ten years old when I first saw the show in reruns, and didn’t know much about romance, I somehow knew Jeremy Bolt (played by Bobby Sherman) was hero material. It was shortly thereafter when I created my first historical romance. Instead of writing the story down, I spent hours telling it to my friends. Naturally, in my story, Bobby was the hero. But my setting wasn’t historic Seattle like his television show. Instead, it was a medieval castle where the heroine, moi, needed to be rescued from evil-doers by my knight in shining armor on his snow white horse.

It’s probably a good thing I didn’t recycle that plot when I actually started writing my stories down on paper.

Thank you for allowing me a moment to reminisce. I now return you to your regularly scheduled book review. 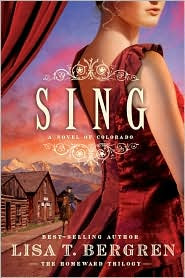 A few months ago I posted a review of Breathe, the first in a series of historical novels by set in Colorado. I loved that book and for readers who took my advice to read it, I hope you enjoyed it as well.

Sing, the second book in The Homeward Trilogy takes us back into the lives of the St. Clair siblings: Odessa, Dominic, and Moira, and author Lisa T. Bergren doesn’t miss a beat as she plunges the three of them into ever deepening danger and intrigue.

Odessa, Dominic and Moira are busy pursuing their own lives. Odessa and her husband Bryce, who both suffered from consumption in the first book, have stayed healthy and now have a baby. Life would be perfect for them, if not for the harsh winter that has devastated their ranch and taken the lives of most of their horses. Bryce feels a strong need to leave Odessa and the baby and travel to Spain to obtain more of this fine stock of horses. He believes that if he doesn’t go, their ranch will not survive another year. But there’s a known enemy lurking about, and Bryce can’t risk leaving Odessa and the baby in danger. But even if he stays, will he be able to protect them?

Moira, with her dream to be famous, has appeared on stage in the finest opera houses in Paris. But she’s put her trust in the wrong people and now finds herself pursuing her dream, not in Europe but in saloons across the west. Soon Moira finds herself living a lifestyle she knows her mother would never have approved of. And when evil finds her, she suffers in ways she could never have imagined.

Dominic has pursued his dream of fighting in the ring. In South America, after a fight goes bad, Dominic finds himself in a living nightmare. Forced into servitude on a ship, he soon finds this really isn’t the worst thing that could have happened to him.

Three dreams, somehow gone terribly awry; three siblings who need to find a way to pick themselves up and trust God to lead them out of tragedy and danger.

Sing is absolutely fascinating, full of rich details and an ever deepening plot that winds its way around each storyline.

In my review of Breathe, I said life is tough for her characters and Lisa T. Bergren will keep readers on the edge of their seat until the very end. The same is true for this book and it’s easy to see why she’s a best-selling author. I can’t wait to see what’s in store for these characters in her next book, Claim, which is due to release in June. I’ll be sure to let you know when it’s available, but in the mean time, Sing, is one to add to your must-read list.