THE ARTFUL MATCH by Jennifer Delamere, Reviewed by Paula Shreckhise 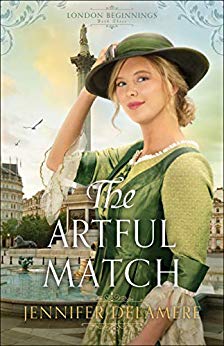 The Artful Match by Jennifer Delamere is the third book in the London Beginnings series. Each book tells about one of the Bernay sisters. This time it is the youngest sister Cara’s turn.

Cara Bernay has grown up in an orphanage run by George Mueller. She is an orphan but is still close with her two sisters, Julia and Rosalyn. They have each found their way in the world. Cara has been a maid and is now a governess. With a tragedy narrowly averted, she finds herself without a position. She wants to turn her love of painting into something that will support her and show her sisters that she can succeed. She meets another painter, Langham Burke, who suggests that she model and finds her a room with other painters. Through Langham, she meets his brother, Henry, the Earl of Morestowe, and Henry’s ward, Amelia, a petulant, lonely child. As the story moves along, Cara is invited to the Morstowe Estate and has a successful way of dealing with this motherless child. All through the misadventures, Cara is certain God is watching over her and is in control. The author paints her as a compassionate, sometimes naive, girl with a strong faith.

Historical fiction always teaches me something. This period in English history of 1881 is when rich American industrialists were seeking to marry their daughters into the British aristocracy. There was much meddling by the matriarchs of these two groups. It was interestingly portrayed in this story. I had also read about George Mueller and his orphanage but this rendition helped make the facts more real.
This third book of the series nicely concludes the stories of the three sisters in their search for love and a fulfilling life.

I recommend this book and series for fans of Historical Christian Fiction and for those who like a little adventure in their reading.

*I was given a complimentary copy of this book by the publisher on behalf of the author. I was not required to give a favorable review. All opinions are my own.*

BackCover Blurb:
Cara Bernay has never fit in. At loose ends in 1881 London after a near tragedy costs her a job, she befriends a carefree artist. With his help, she begins planning a new life and developing her own artistic talent. But soon Cara finds herself at odds with the artist's brother--a handsome but arrogant earl forcing his brother back to a "respectable" life.

Henry Burke, the Earl of Morestowe, feels the weight of growing financial burdens. His younger brother is the one person who can save their family, and Henry needs him back home. Despite misgivings about Cara's mysterious background, Henry sees she's a positive influence on his brother and on Henry's young ward, and he strikes a deal with her to return with them to their estate.

But the family has their own secrets, and when Cara, drawn ever closer to Henry, stumbles onto the truth, she must choose between following her heart and pursuing a bold plan that could bring disaster.