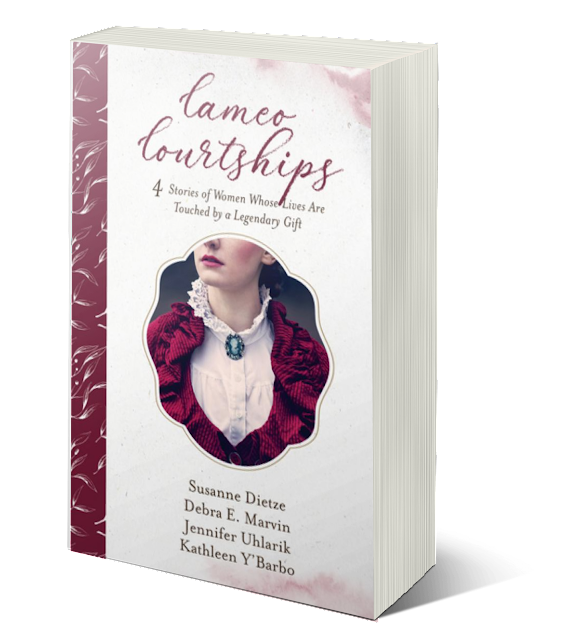 Deb and Susie here, welcoming you all to our release party!  This latest novella collection is fresh off the presses from Barbour Publishing, thanks to a great idea Susanne Dietze came up with!
We'll be giving away a paperback, but before we get busy chatting, please let our waiters offer you a sweet! Let us know if you've had a chance to read and what you think!
Or buy it now!


PINNED ABOVE HER HEART by Susanne Dietze
1851 – Pittsburgh, PA
After receiving the Victoria Cameo, aspiring journalist Clara Newton works to expose a smuggler, but reporter Byron Breaux must break the story first or lose his job. Working together is out of the question until they learn secrets that threaten Clara’s father. . .and her heart.
**
Susie here! I'm so glad to celebrate Cameo Courtships with you! Allow Pittsburgh native Joe Manganiello to serve you.
Ooh, what do we have here? Choose between a Primanti Brothers' sandwich with french fries inside, Pittsburgh-style, and join us for the party!


Seriously, do not knock the fries on the sandwich thing if you haven't tried it. It is fabulous. So are Pittsburgh-style salads, which are served with french fries on top! YUMMM. If you'd like some ketchup, we have Heinz 57...from Pittsburgh, of course.

Deb's and my stories may be set in Pittsburgh, but the Cameo Courtships story begins in London, England, at Buckingham Palace. In the 1844 Room, to be exact!
Queen Victoria and her pet Deckel make special cameos in the scene. (Sorry for the pun. Couldn't resist.)


We quickly move from London to Pittsburgh, however. Pinned Above Her Heart begins on the banks of the Monongahela River.

When I was first married, I lived near Pittsburgh and fell in love with the city. This story was a fun opportunity to revisit it.

I was also excited to work with a group of friends on stories that were inter-connected. The process took a bit of brainstorming, lots of communication, and multiple efforts on my part to create a decent family tree (for some reason, I couldn't get it to work well on my computer).

While I didn't get to go back to Pittsburgh to do any research, I had fun learning more about the city and its various industries, including glassmaking (which plays a large role in my story). Here's an example of cameo encrustation on a decanter.

Moving on to Deb, who recently visited Pittsburgh!

Here's some behind the scenes photos! The Carnegie Library is part of the connected buildings housing the Natural History Museum and Art Museum, and the Music Hall. I visited in May of 2018 to see firsthand where Bertie and Russell would spend much of their time in my story.

1895 – Pittsburgh, PA ​The arrival of a handsome Scottish administrator ruins Miss Bertie Hart’s dream to oversee the new Carnegie Library children’s department. Unfortunately, it doesn’t take wearing the Victoria Cameo to see he’s the perfect foil for the rest of her grand plans.


In between Susie's and Deb's stories are these two from multi-published authors Jennifer Uhlarik and Kathleen Y'Barbo:

*Get emails for each new post from Inkwell Inspirations by going to the SUBSCRIBE button at the top of the page.

One commenter who'd love to win a paperback of Cameo Courtships will be randomly drawn on July 2. (Ebook only for outside those contiguous U.S. states)
Posted by Debra E. Marvin at June 17, 2019