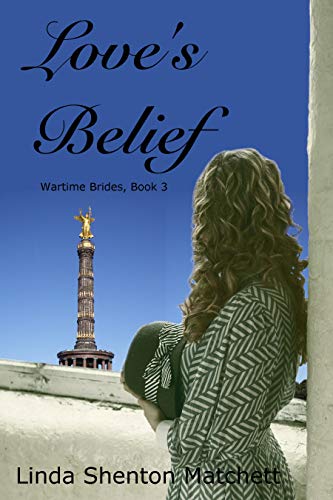 This book was a glimpse into the past where we get to see what it might have been like to live under Nazi rule during WWII. It is a picture of Christians caught between a corrupt government and what they know to be true and right.

Dieter has given his arm to the Fatherland in a previous battle and now, as a Christian, has conflicted feelings about Germany under Hitler. He is struggling to maintain his small shop.

Pia and her mother are midwives helping to bring life. They are also staunch Christians and doing their best to comply with the “rules” as they do their job of delivering babies, even Jewish ones.

Pia and Dieter’s paths cross and it seems God is speaking. Join them as they live out their faith amidst dangers and bright spots under the oppressive Nazi rule.

Ms. Matchett has given a well researched picture of a dark time in history. But she has aptly focused on the hope that Christ can give if we are attuned to Him.

I was so immersed in the story that I wanted to continue reading about Dieter, Pia and their lives. I look forward to more from Linda Matchett ‘s able pen.

*I was given a complimentary copy of this book by the author. I was under no obligation to post a favorable review. All opinions are my own.*

BackCover Blurb:
Midwife Pia Hertz and her mother Sabine have been delivering babies long before the Nazis came to power. Now, the Third Reich has implemented mandates that require Jewish babies and other “undesirables” to be killed as part of The Final Solution. Is Pia’s new faith in Christ strong enough to defy the laws of man?

Despite the agony of the injury at the Battle of Drøbak Sound that took his arm, Dieter Fertig is relieved he’s no longer part of Hitler’s army. He returns to Berlin and discovers Jews are being deported by the thousands. When he realizes the Nuremburg Laws require his best friend’s baby girl to be killed, he must find a way to spirit the child out of Germany before the Nazis discover her existence.

Inspired by the biblical story of Shiprah and Puah, the midwives who saved Jewish babies during Pharaoh’s reign, Love’s Belief shows how one person’s actions can change the world.