A RELUCTANT BRIDE by Jody Hedlund, Reviewed by Paula Shreckhise and Winnie Thomas 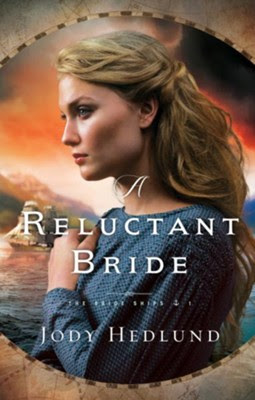 A Reluctant Bride by Jody Hedlund is the first in the series Bride Ships. It is set in England and British Columbia in 1862.

Paula's Review:
Mercy Wilkins has a servant’s heart but she is caught in poverty.

Chapter 4: “Was death so common a visitor in these parts that people expected it, maybe even welcomed it as the only true savior from the pain? Or had they, like her, closed off their heart to the pain in order to continue on?”

She embarks on a ship to the British colonies in order to give her siblings a better chance to survive in their London slum. “She longed for the chance to finally stand on her own. This trip, this voyage, might be the only possibility she’d ever get to do that.” The only thing she wasn’t told is that she is expected to choose a husband when she arrives.

Joseph Colville is a nobleman but is fleeing his responsibility after the death of his family. He has become a doctor and is helping the destitute in the slums.

Joseph and Mercy meet on the Tynemouth where Joseph is the ship’s surgeon and Mercy sometimes assists him.
This was a very sad story for most of the book. Ms. Hedlund eloquently conveyed the utter squalor of Shoreditch slum of London and the poverty that beset the city in 1862. She vividly portrayed the deep privations of the sea voyage that took many months. Yet hope was in the story too. Mercy and Joseph learned a lot about God, themselves and each other. They showed their humbleness even in rough times. They also progressed in their faith and trusted in God to show them His leading.

A thought provoking, epic historical book, once again proving that Jody Hedlund is a phenomenal writer who is not afraid to tackle a hard subject.

*I received a complimentary copy of this book from Bethany House. I was not required to give a favorable review. All opinions are my own.*

Winnie's Review:
A Reluctant Bride is the first book in a new series, Bride Ships, by Jody Hedlund. With great attention to historical detail, Hedlund takes the reader on a journey from the poorest slums of London to hope for a better life in British Columbia. I enjoyed meeting the well-crafted and colorful characters and learning more about bride ships and the part they played in history. The settings in both London and British Columbia in the 1860s intrigued me and made vivid backdrops for the story. With just the right touches of suspense, romance, and inspiration, this book kept me riveted, while messages of hope, faith, courage, and the value of each individual added to my enjoyment of the story.

Hedlund’s distinctive historical detail, along with her memorable characters and brilliant story-telling make this a must-read for those who enjoy compelling historical fiction based on actual happenings. The author’s notes in the back of the book were an added bonus, and I was intrigued by some of the fascinating research she uncovered while writing the story. This book is headed right for my keeper shelf, and I’m anxiously awaiting the next in the series.

*I voluntarily reviewed a complimentary copy from the publisher/NetGalley. All opinions are my own.


BackCover Blurb:
Living in London's poorest slum, Mercy Wilkins has little hope of a better life. When she's offered an opportunity to join a bride ship sailing to British Columbia, she agrees. After witnessing so much painful heartache and loss in the slums, the bride ship is her only prospect to escape a bleak future, not only for herself but, she hopes, someday for her sister.