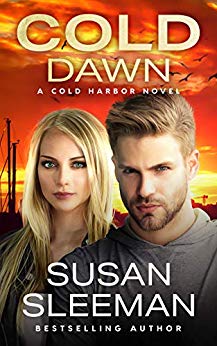 It’s been such a treat to meet all the people in Susan Sleeman’s Cold Harbor series. Well, maybe treat isn’t the right word, since they manage to get into more trouble than a barrel of monkeys! Still, the characters are wonderful and Sleeman gets them in and out of trouble with her skillful suspense writing. Samantha and Griff are well-drawn and endearing characters who get a second chance at love when they are drawn together through the death of a mutual friend. Their expertise in their different fields is tested when they work to solve the mystery of his murder.

This story has intrigue, suspense, and inspiration all mixed together with a dash of romance. I enjoyed seeing the growth and healing that Samantha and Griff went through to get their happily ever after. Along with their story, we got an introduction to the author’s next series, Truth Seekers, by meeting Emory Steele, the heroine in Dead Ringer, which is the first book in the series.

The only problem I had with Cold Dawn was some confusion during the last part of the book. I had a hard time keeping track of all the suspects and extra characters. Other than that, Sleeman’s superb writing and knowledgeable background in crime fighting kept me on the edge of my seat. I’m looking forward to the next series and more great suspense.

Blackwell Tactical operator and former criminalist Samantha Willis discovers forensic evidence to prove her friend has been murdered. But before she can gather the evidence, an explosion erupts and a fiery inferno traps her in a building. She helplessly watches the evidence go up in flames and prays that she can escape before the encroaching flames take her life.

Or an act of revenge…
Firefighter and former Navy SEAL Matt Griffin knew his friend’s death was no accident, and he arrives at the building to gather his own evidence. But he sees the building engulfed in flames and discovers a familiar car parked in the lot. Sam, his former girlfriend, had to be trapped inside. Despite his training, despite his captain’s protest, Griff takes off without a threat assessment, risking his life to enter the building and drag Sam to safety. When he does, he can’t help but wonder if the fire was set to destroy evidence or if it was set to kill Sam. Either way, if Sam survives, he vows to hunt down the answer.

Available in digital ebook and paperback: