DIAMOND IN THE ROUGH by Jen Turano, Reviewed by Paula Shreckhise and Winnie Thomas 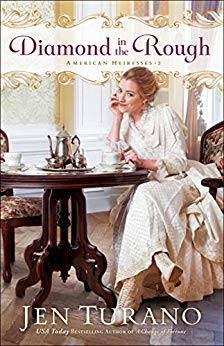 PAULA'S REVIEW:
Book #2 in the American Heiresses series, Diamond in the Rough is a delightful romp into New York high society in 1885.

Can a “Diamond in the Rough” be turned into a “Diamond of the first water”?

After her family has been estranged from her grandparents, Poppy Garrison finds herself under the tutelage of her grandmother Viola Van Rensselaer, one of the elite in New York society. She is to make her debut, where wealthy American fathers hope to marry their daughters to titled Englishmen. The problem is Poppy has no airs or experience. She is also somewhat clumsy. But our heroine has a heart of gold and when she sees the unfortunate in need, she wants to remedy it immediately. Can she be an original by prompting wealthy patrons into helping more personally than just donating money to a cause?

In order to be schooled in proper decorum and etiquette, Poppy meets Reginald Blackburn, who is a traveling companion of his cousin, Lord Charles Lonsdale.

Madcap comedy ensues. Ms. Turano is an expert in portraying floundering females and hilarious situations with a few twists thrown in. The supporting cast is well fleshed out in Murray Middleton and Adele Tooker. Look for an incident with a horse that has the same name as Murray’s mother and the battle of the clotted cream with Adele and Poppy.

This book is not without it’s spiritual elements. Poppy’s grandfather, George, explains his awakening to Poppy and a family reconciliation is the result. The other characters express their faith naturally.

I highly recommend Jen Turano’s books, especially this American Heiresses series to fans of Christian fiction who want a nice romantic comedy kind of story.
I give this book 5 stars.
*I received a complimentary copy of this book from the publisher on behalf of the author. I was mot required to give a favorable review. All opinions are my own.*

WINNIE'S REVIEW
Set in Gilded Age New York where it was important to be a “diamond of the first water,” Diamond in the Rough features Poppy Garrison who despairs of ever reaching that goal. Delightful, quirky, and prone to mishaps, Poppy seems to attract chaos and pandemonium wherever she goes. She meets each new disaster with aplomb and continues to be her endearing and entertaining self.

“You must have realized by now that I’m not always keen to follow rules.”

Despairing of ever seeing Poppy fit into society, her grandmother hires Reginald Blackburn to give her etiquette lessons. What follows is a hilarious, entertaining romp that left me giggling, chuckling, and laughing out loud (with maybe a snort or two for good measure)! And, yes, I realize that precludes me from being a diamond of the first water! I’ll have to settle for being a diamond in the rough like Poppy. I love Poppy and Reginald. They are both fantastic characters—some of my favorite Turano people. They aren’t perfect, but they’re perfect for each other. A stellar supporting cast adds to the enjoyment and fun of the tale. Filled with witty banter, humor, romance, intrigue, and a few life lessons, it’s a delight to read. I loved the message to be yourself and not who others want you to be.

Jen Turano is an incredibly gifted writer with an amazing sense of humor. Her characters come alive on the page and are so delightful and fun. The settings are all so richly painted, and the colorful imagery in her stories brings them to life. If you’ve never read any of her books, do yourself a favor and grab one. You can start with this one—it’s part of a series, but it can easily be read alone.
*I voluntarily reviewed a complimentary copy from Bethany House. All opinions are my own

COME BACK TOMORROW FOR PAULA'S INTERVIEW WITH AUTHOR JEN TURANO and a chance to WIN a paperback of Diamond in the Rough!

BackCover Blurb:
To save her family from financial ruin, Miss Poppy Garrison accepts an unusual proposition to participate in the New York social season in exchange for her grandmother settling a family loan that has unexpectedly come due. Ill-equipped to handle the intricacies of mingling within the New York Four Hundred, Poppy becomes embroiled in one hilarious fiasco after another, doomed to suffer a grand societal failure instead of being deemed the diamond of the first water her grandmother longs for her to become.