THE SPICE KING by ELIZABETH CAMDEN, Reviewed by Paula and Winnie 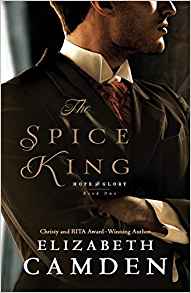 PAULA's REVIEW:
The Spice King is book number one in the series Hope and Glory by historical author Elizabeth Camden.

An avid fan of history, I relished this setting of 1900 in Washington D.C. and surrounding areas. I learned about the early days of regulating the food industry and the beginning of the Good Housekeeping Seal of Approval. The glimpse into the Smithsonian and The Department Of Agriculture was fascinating. The explanations of the process involved in spice making were especially interesting.

Ms. Camden has done a commendable job in her research. I love her writing style. Her characters were well drawn and you could see into their motivations.

Annabelle Larkin finds a way to approach reclusive Spice Magnate, Gray Delacroix, in search of a cutting of a rare vanilla orchid. This could be the answer to the quandary of how to keep her blind sister, Elaine, doing productive work at the Library of Congress. She gets much more than she bargained for.

Gray is a shrewd businessman and a man of integrity but he has strong political opinions. He is also dogged by Malaria and doesn’t know when the attacks will strike next. He has long taken care of his twin siblings, Caroline and Luke, who are twelve years his junior. They are adults now and have made their life choices.

There is much intrigue to follow in this story and some of it is left unresolved, making the reader want to see what happens in future books involving Caroline and Luke.

Don’t miss this wonderful story to find out what happens to Annabelle and Gray.
I give this book 5 stars!
*I received a complimentary copy of this book from the publisher on behalf of the author. I was not expected to write a favorable review. All opinions are my own.

WINNIE'S REVIEW:
With a captivating storyline and colorful, well-drawn characters, Elizabeth Camden starts her new series, Hope and Glory, off with a bang. The striking cover and title captured my interest before I even knew what the story was about. Impeccable historical detail and complex plots are some of Camden’s strengths, and they are evident in The Spice King.

Gray Delacroix and Annabelle Larkin seem to be opposites in many ways, but the chemistry between them is obvious and compelling. I liked Annabelle’s gutsy, optimistic courage and Gray’s love and care for his family. The outstanding cast of secondary characters added to my enjoyment of the story, and Camden’s clear, concise writing is a plus.

Uplifting messages of importance of family, courage, hope, and forgiveness give added dimension and depth to the story. “God had never promised them a life free of sorrow, only the tools to hold and keep them through stormy days.” There is a bit of a cliff-hanger at the end but not enough to detract from the tale. I’m looking forward to Caroline’s story in the next book.

*I voluntarily reviewed a complimentary copy from Bethany House/NetGalley. All opinions are my own.

BackCover Blurb:
Gray Delacroix has dedicated his life to building his very successful global spice empire, but it has come at a cost. Resolved to salvage his family before it spirals out of control, he returns to his ancestral home to save his brother and sister before it's too late.

As a junior botanist for the Smithsonian, Annabelle Larkin has been charged with the impossible task of gaining access to the notoriously private Delacroix plant collection. If she fails, she will be out of a job and the family farm in Kansas will go under. She has no idea that in gaining entrance to the Delacroix world, she will unwittingly step into a web of dangerous political intrigue far beyond her experience.

Unable to deny her attraction to the reclusive business tycoon, Annabelle will be forced to choose between her heart and loyalty to her country. Can Gray and Annabelle find a way through the storm of scandal without destroying the family Gray is fighting to save?