Running With the Big... Bunnies? 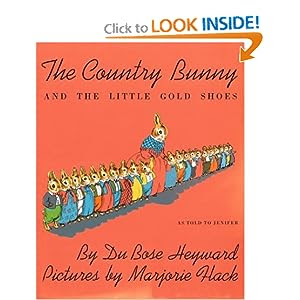 When we started this series of posts about our favorite childhood stories, the first book that came to my mind was The Country Bunny and the Little Gold Shoes. If I remember correctly, I received it for Easter one year, and read it annually after that. And then, like most childhood tales, I tucked it away.

When I reread it as an adult trying to juggle motherhood, being a wife, and a long-standing desire to be a writer, the story of the simple brown-skinned cottontail who dreamed of becoming an Easter bunny brought me to tears.

Born in 1885 in South Carolina, Dubose Heyward was said by his teachers to be bright, but absent-minded. He left school at 14 and went to work in a hardware store. He began writing under the tutelage of John Bennett, and in 1921 traveled for the first time to McDowell's Writing Colony in New Hampshire where he met his wife, an aspiring poet.

In 1925, Heyward published what many consider his best-known literary work, Porgy, which later became the basis for the play, Porgy and Bess, opera and motion picture by the same name.

Five years later, Heyward and his wife Dorothy had a little girl they named Jenifer, and Heyward slipped into a habit of creating bedtime stories for his daughter. From those stories came the tale of the Country Bunny, who had to be very brave and very wise and very kind in order to attain the coveted position of Easter Bunny.

Upon hearing it, award-winning illustrator Marjorie Flack (best-known for her illustrations in The Story of Ping) asked Heyward to write it down so she could  illustrate it. The first edition was printed in 1939. Sadly, Heyward died of a heart attack a year later, when his daughter was just 10.

The story of the brown-skinned cottontail who isn't like "the big white bunnies who lived in fine houses and the Jack Rabbits with long legs who can run so fast" and wakes up one day to find herself taking care of 21 little baby cottontails (okay, so I only had four, but sometimes they felt like 20 or 21!) appeals to me on so many levels.

As the story goes, she takes her 21 baby bunnies and trains them and teaches them to take care of the household, to be responsible and helpful bunnies, and when they are old enough to be left alone in care of the bunny home, she "tries out" for the job of Easter bunny.

Even a simple, country bunny from nowhere, who has never done anything but raise a passel of rabbits, is strong enough, wise enough, and kind enough to run with the big bunnies, because it's the heart that counts, not size or color or background.

As a "country momma" without a fancy college degree or a lot of money, without an exciting career, who can't really mark much down on a resume beyond bringing up a houseful of children, this story inspires me, as I hope it inspires you.

Your dreams are not dead. It's never too late to go after what you want. Discount the naysayers, ignore the teasing and laughter, and do what's in your heart, even when it's scary, and even when it's hard, because sometimes, just being brave enough to try is worth as much as being the kindest, the wisest, or the swiftest. 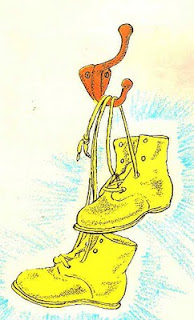 What are your "gold shoes"?