Checking into the Heartburn Hotel

by Susanne "Please No Bedbugs" Dietze
Growing up, my family didn't go on “destination vacations,” unless by "destination" you mean Grandma and Grandpa’s house. Every summer, we’d fold into the sedan and make a cross-country road trip to Tennessee.

In ye olden days before the internet, we’d drive until Dad decided it was time to stop. Mom would pull out the AAA guidebook and figure out what sort of lodging was available in the next town. One thing she always looked for was a place with a pool. My brother and I could swim off our pent-up energy and leave my Dad a full hour to unwind in the hotel room. 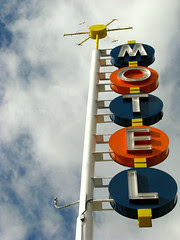 On our Tennessee-bound trip when I was eleven years old, we checked into a chain hotel in Kansas (not the places depicted in the photos, by the way, which I'm sure are perfectly nice). Even at age eleven, I was something of a motel connoisseur and I remember thinking that this place looked promising. With its brick façade, in-house restaurant and well-appointed lobby, I had a hunch that this motel was the kind that offered freebies, like HBO and cute little shampoo bottles.

I was right about the toiletries. And the HBO. But we had another freebie in our room. Something foul-smelling and elusive. After dinner, I found the source of the stench behind the trash can. I’ll just say that the room’s previous occupants had a pet – a small dog, I’d say – and the poor thing hadn’t felt well.

The pet’s present was the first of several gifts we didn’t want or need. There was a bit of a problem with the faucet. The way the room smelled and, truth be told, felt when we touched things, we weren’t sure anybody had cleaned in there since the Carter Administration. Needless to say, nobody was in a charitable mood by this time. My brother and I got into a bit of trouble for being too silly. So while our parents were occupied with the "dog issue" (as we came to call the incident), my brother suggested we watch TV until we could swim.

Nowadays, many hotel televisions are set to an automatic “home channel” when they’re turned on. The screen serves as a directory to local channels and pay-per view options. But back then, just like my home TV, hotel televisions had no such channel (or in my case, a safeguard). They came on set to whatever channel the room’s previous occupants had watched.

The dog-owners must have been watching HBO. With a pop of light and a crackle of static the television came to life, and behold! Naked people tap dancing. Ok, not totally naked. They were wearing top hats. Before I could say “eww,” my mom hopped up and hit the power switch.

Image by Patrick Powers via Flickr
At least it smelled better out there. The air was thick with an industrial dose of chlorine. Relying on the skill I’d honed in years of YMCA training, I decided to swim laps. I was probably thinking how cool I looked when I freestyled smack into another kid. (I am that graceful still.) I apologized and dog-paddled --my head completely out of the water, the better to see where I was going -- back to the steps.

Though it seems silly now, swimming into someone almost did me in. The act seemed symbolic of me and my awkward place in the universe. I was just out of a difficult period where I’d switched schools. Now it was time to switch back to the old district for junior high, and I expected to start the coming year as I’d ended the previous one, self-conscious and clueless.

Not that I was a total pessimist, but I figured that being self-conscious and clueless was just the way of the world for me. I was the sort of kid who swam into people and got stuck in embarrassingly gross hotel rooms. At that moment, I loathed Kansas, the hotel, and myself.

I was thinking that the stinky room was preferable to hanging around the pool when someone said hello. I turned. It was the girl I swam into. Big-eyed, dark-haired, and pretty, she wore a red bathing suit. She smiled and invited me to swim with her.

I was impressed by this girl in the red suit – Susan, she said. She was confident. She had a cool Oklahoma accent. She could swim in a straight line.

We messed around in the water for a while, and the sun was setting when one of our moms called us out of the pool.

“Do you like to write letters?” Susan asked me.

Did I like to write letters? Boy howdy, I did. So Susan and I agreed to be pen pals.

I knew better than to get my hopes up. People become pen pals all the time. But I gave Susan the number of my smelly hotel room and she phoned me within the hour to exchange addresses.

I went to sleep that night with all thoughts of the stinky room (and thankfully, the naked dancers on HBO) displaced by a sense of awe at the turn of events. I’m still amazed when I think about meeting Susan because that Kansas hotel, nasty as it was, was used by God as a vehicle to give me an unexpected gem of a gift.

I’m not going to tell you how many years it’s been since I swam into Susan, but we still write to each other. She has been a constant in my life for ages, through the awkward days of junior high; through boyfriends and AP exams; through college roommates, church searches, and frustrating bosses; through joys, losses, and disappointments. We’ve visited in person (though it’s been far too long since we’ve seen one another).

Susan is a gift of God that keeps on blessing me. Over the years, she’s given me encouragement and made me laugh.

But in that Kansas swimming pool, God didn't just give me the gift of a friend. He also used Susan to teach me a valuable lesson, one which I’ve tried to pass on to my own kids. With a smile and a kind word, you can change the course of a person’s day. Maybe even the rest of her life.

Susan’s smile sure changed mine.

Serious Question: Have you ever experienced a kind word or gesture that changed your day?

Not-so-serious Question: Have you ever stayed in a horrible hotel, one where your socks turned black or the neighbors blared the TV?