When a Vacation Exceeds Your Expectations 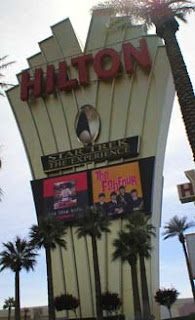 Okay, I know we're supposed to be sharing about vacations gone wrong, but I have a confession to make: I can't recall ever going on a truly bad vacation. Maybe it's because I don't get away very often. In any case, since I didn't have a horror story to contribute, I thought I'd share the most opulent, over-the-top vacation I ever accidentally fell into.

Back in 2002, my husband, Marcus, entered an online contest for a three night stay at a luxury suite at the Las Vegas Hilton. He entered me, too, but neglected to tell me about it. So when I got a call from a woman saying I'd won, I thought she was a telemarketer and almost hung up on her. After lots of confusion on my part, the patient woman finally convinced me that I had indeed won the grand prize.

We expected to be staying in something on par with Embassy Suites, so we brought along Billy's godparents, Chuck and Leigh. Our first clue that we were wrong was when we were directed to the VIP elevator. The golden-doored, velvet-roped, VIP elevator, which only goes to one place: all the way up to the Verona Sky Villa. When Elvis played at the Hilton, I imagine this was the suite he stayed in. At 15,888 square feet, it's bigger than most people's homes. Now it's reserved for whales (the term for super-high rollers), those with enough money to pay for their stay ($15,000 a night), or simple contest winners like us.


This is the first thing you saw when you opened the front door.
We called it The Stallion Room, but it's really the grand foyer.
You're only seeing half of it here. There's another horse and another set of stairs on
the other side. Papa Chuck is the dude behind the horse. 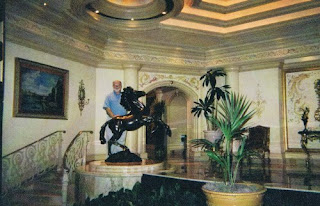 This is part of the living area. Marcus is sitting in front of a
fireplace that could double as a spare bedroom. When we
were walking through the villa for the first time,
Leigh and I couldn't stop laughing.
Every time we turned a corner there was another room,
or a statue, or workout equipment, or a telescope... 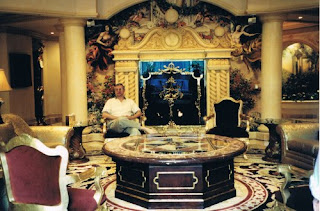 Here's Marcus and a then ten-year-old Billy sitting by one of the
many indoor spas. Everything you see outside the window
is part of the same suite. The whole thing circles around a cool
outdoor sitting area and pool. 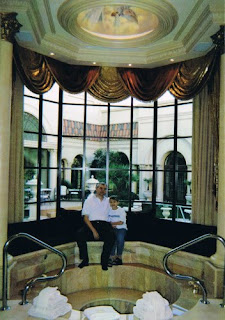 Billy enjoyed playing bartender. He made us some
lovely glasses of Sprite, Dr. Pepper, and Coke
garnished with lemon twists, cherries, and little toothpicks. 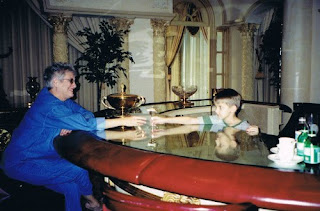 Billy and Grandma Leigh tinkle the ivories
on the grand piano. 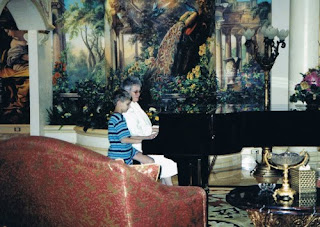 One of the many murals. They were everywhere... on the
walls, the ceilings... You name it, it had a mural on it. 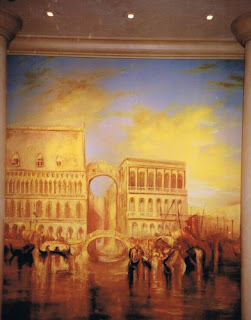 Last but not least, this was our bedroom.
There were three bedrooms in the place, and all
were just as fancy as this one. 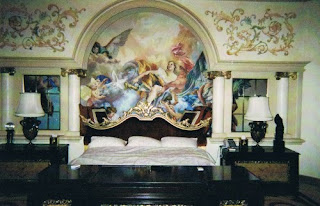 We had three days of fun in the kind of excessive gaudiness that we'll never experience again. One of the funniest things was watching Billy play with his green plastic army men on the inlaid marble floor. At one point, Leigh said something about how fancy it all was, and Billy replied, "But it's not very homey. Heaven is going to be much better." That's a paraphrase, but it's true to the spirit of his remark. And he was right. It was a cool thing to visit, but I wouldn't want to live that way. Still, what a blessing that God gave us a little taste of the "high life"!
Posted by Jennifer AlLee at June 24, 2010