By Diane Burke
Because we all had young families and moved into our neighborhood around the same time, it wasn’t surprising that the families on my cul-de-sac became fast friends. We did everything together--- yard parties, pool parties, barbeques. Some of us decorated our homes with Christmas lights and others with Menorah’s but we’d gather together, sing both Christian and Jewish songs and just be happy to celebrate our holidays/holy days together.

So when I explained my intent to organize a neighborhood white water rafting trip to my friend, Millie, I was surprised when she refused. The conversation went something like this:

Me: What? It isn’t camping Millie. It’s just going to be a family float trip down the Lehigh River. We’re going to carpool up to the Poconos. We’ll be on the water about four hours. There’ll be guides with us to show us what to do. Then we’ll have a hay ride back to headquarters and a barbeque. It’ll be fun.

Millie: You can call it what you want. If it entails water, bugs, dirt, mosquitoes or anything else outdoors than it’s camping. Jews don’t camp. We shop. We eat in fine restaurants. We shop some more. But we don’t camp…or float…or whatever you call it.

After a long conversation, I finally convinced Millie that she needed to come and we’d have a great time.

The morning of the trip everyone gathered in front of my home. My eyes widened and I almost laughed out loud (but refrained) when Millie, Larry and their two children arrived. Millie and Larry, both a bit heavy set, wore fisherman caps, black horn rimmed glasses with an elastic cord taped to their head holding the glasses in place, loud plaid cotton shirts and contrasting Bermuda shorts revealing the whitest legs I have ever seen. Millie hadn’t lied to me about not liking to be outdoors much.

As we loaded our families in the car pools, Millie murmured, “Hope you know what you’re doing. I’m telling you we don’t camp.”

The couple hour caravan to our destination flew by. We arrived at headquarters, signed our safety releases, picked up our life vests and prepared to board an old yellow school bus taking us through the woods to the river. 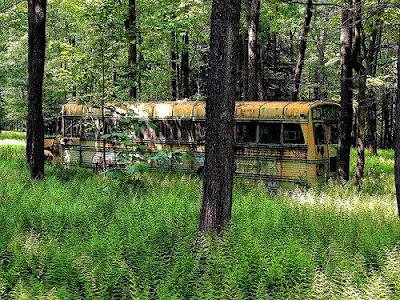 Millie (standing outside the bus with the release in her hands): This says they’re not responsible if I die.
Me: Millie. Sign the paper. It’s just a formality. No one’s going to die.
Millie: They say they aren’t responsible for broken bones or head injuries.
Me: (laughing) Millie, just sign the paper and get on the bus. I’ve already been on this trip a couple of times. It’s not dangerous. You’re going to have a good time. Now come on, everyone’s already on board.
When we arrived, each family had to carry their raft over their heads and down a small slope to the river. Millie and Larry stumbled over sticks and brush but made it to the bottom in one piece.

“Sure feels like camping,” Millie muttered as she passed by.

The instructors lined us up and gave us very explicit instructions on how to navigate the waters, how to paddle as a team, what to do if we fell overboard and what to do if we got stuck on a rock. Then we walked into the water and climbed into our rafts.

Instantly, Larry fell on the slippery rocks, lost hold of their raft and Millie and her two children started to float away. My husband and I helped Larry to his feet and back into his raft. Millie glared but remained silent. And we were off. 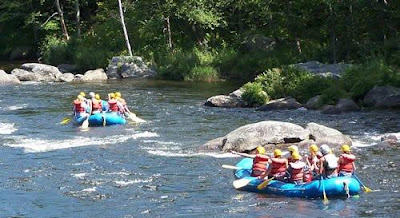 When we reached our first batch of white water, I knew I should have listened to Millie. Larry fell out of the boat---again. My husband and I pulled him out of the water and into our raft (while it was spinning wildly out of control in the current I might add because we weren’t able to man the oars and rescue Larry at the same time.) Millie and her two children were madly trying to paddle their raft as the white water swept them down river. 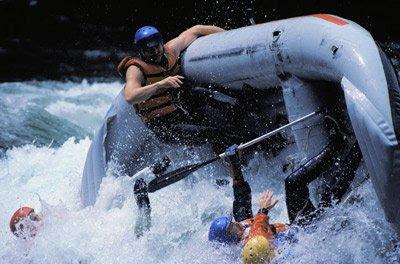 Chaos ensued. The guides were blowing their whistles, yelling commands, and several rafts were in hot pursuit of the boy (Who by the way had listened to the instructions perfectly and was headed downstream feet first, on his back and clinging to his life preserver). When he disappeared from sight around a bend, my son started to cry and begged to get out of our raft and ride with one of the guides.

The current continued to sweep all of us downstream amid the sounds of yelling and crying and whistles as the guides demanded we all row to shore the first sign of still water.

As we rounded the bend we passed Millie. Her raft was stuck on a rock and the last I saw her she was on one end of her raft, her daughter was on the other, and they were both bouncing as instructed to try and bounce their way back into the current.

Within minutes (although I must admit it felt like an eternity), the guides had rescued Richard---who thought the whole thing was awesome and wanted to do it again---and had all the other families on land standing on top of a small ridge for a head count.

Everyone was safe and accounted for...except Millie. I grabbed her twelve-year-old daughter and asked, “Jocelyn, where’s your mother?”

She replied, “I don’t know. I kept saying bounce mommy, bounce. And then suddenly the raft was back in the water and I started to row but when I looked over my shoulder, mommy was gone.”

Before I could panic, laughter started to spread amid the forty people on the hill. I turned my head and there was Millie---floating on her stomach despite the life jacket. She’d ripped her bathing suit on one of the rocks. She mooned the group as she, still caught in the current, went sailing by---with another raft filled with six young, muscled guides paddling in hot pursuit.

As I stared in horror and disbelief at the scenario in front of me, I watched the men row up beside her, reach down and pull her out of the water—into the raft---where the propulsion of her body in space knocked over two of the guides to their backs with Millie landing smack dab on top of them. Unable to row until they could get from beneath her, their raft traveled in circles like tea cups on a Mad Hatter ride with the current.

The trained guides soon had everything under control. They rowed to shore and had even provided a towel for Millie to wrap around her waist to preserve some sense of modesty.

My heart was in my throat and all I could pray was “Oh God, Oh God” as she spotted me on the rise and walked straight for me. When she was less than a foot away I kept saying, “I’m sorry. Oh Millie, I’m so sorry.” She looked me right in the eye and said, “I told you Jews don’t camp.”

One of the guides climbed into Millie’s raft and stayed with them the rest of the trip. There were no more incidents and the rest of the afternoon became the fun it was intended to be. 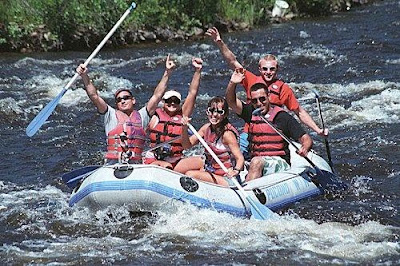 I expected Millie to be angry. I expected her to hate me for the rest of her life.

I was wrong again.

Millie told me it had been the most exciting thing that had ever happened to her. She joked about how it had been humiliating in some ways but memorable in so many others. After all, how many women could claim to shoot the rapids on top of several muscled, handsome male guides. And claim it she did. Because Millie became a neighborhood celebrity. Every barbeque and party for years afterwards had Millie retell the tale from her point of view to howls of laughter.

I learned a lot from Millie that year. She presented herself with grace and humility in the face of major stress and humiliation. She taught me how to take a horrible situation and turn it into a laugh for years to come. And she taught me that maybe Jews don’t camp---but they make the very best friends.

Have you ever tried white water rafting? Would you like to?
Posted by diane burke at June 25, 2010