by Suzie Johnson
What happens when the Hunted rescues the Hunter?
Brenna of Gowrys has been hunted by Ronan O’Byrne’s clan since she was an infant. In a cruel twist of fate, Ronan—as a young boy—witnessed the tragic deaths of both Brenna’s parents. His entire life was spent on hunts and raids as his father searched for the girl who grew up to be called a witch and Wolf Woman. To find Brenna of Gowrys would be to end the curse they believe Brenna’s mother placed on the O’Byrne clan with her dying breath. 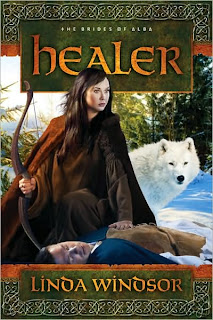 The first book in the Brides of Alba series, Healer is set in Arthurian Scotland, an era which I’ve never read. In fact, all I knew about King Arthur I learned from two movies: Disney’s Sword in the Stone, and Excalibur. I’m almost ashamed to admit this, since I’m such a lover of history. But it’s true. There are a few historical eras and geographical places where my knowledge is quite limited. This is one of them.
Lucky for me, author Linda Windsor had the foresight to add a history lesson in her book. I don’t mean the usual historical facts weaved through a story. I mean a foreword and an afterward. In fact, her explanation of the era and the Arthurian history was quite extensive and as fascinating as the book itself. The understanding she gave me only enhanced my enjoyment of the book. I don’t want to spoil it for you, but I will say that King Arthur’s connection to the lineage of Christ was most surprising. I highly recommend reading these facts before reading the book. But be sure to stop before you get to the teaser for the next book. You’ll want to save that until you’ve finished this book.
Once I read the history, and absorbed it, I settled in for a nice long read, and this book didn’t disappoint. Healer is what I would consider a “big” book. Epic. A book to be savored over time instead of devoured in one sitting. At times I went back and reread passages. Not because I was lost or confused, but because I wanted to soak up the details. I didn’t want to rush through the book because I simply didn’t want it to end.
When Brenna and her wolf, Faol, rescue Ronan from near death, she doesn’t realize he’s her mortal enemy, son of the man who brutally murdered her father, part of the enemy clan who has terrorized her own kinsmen, the enemy clan she’s spent her life hiding from because they want her dead. But even had she known his identity, Brenna still would have nursed Ronan back to health, because she is a healer.
Settle in for an absorbing conflict-filled tale. You’ll be richly rewarded. The wealth of Linda Windsor’s research is evident in the pages, of this most excellent and highly recommended book.