AKA: Gina's Rejected Tenative Doctoral Thesis
by Gina Welborn
with enhancing tips provided by Matt Welborn, esq.
In the beginning (which those bound by time would define as the fall of 1999) was a Word document, and the Word document was with Gina (okay, on her computer for those bound by technicalities), and the Word document was...well, blank. That was also a good description of Gina's mind. Not to be one dismayed by such high obstacles, Gina managed (as she always does) to put words to monitor and produced--a month or so later--her first fiction manuscript. And Gina saw what she'd written and said, "This sucketh."
Actually, in addition to having a blank mind, she was also delusional because she didn't realize what she'd written sucketh until several years later. Sometimes being having "magical thinking" (as ACFW publicity director Angie Breidenbach calls it) is rather nice. Don't tell Angie Gina said that.
Creator. According to Merriam-Webster, it means "one that creates usually by bringing something new or original into being; especially capitalized: GOD.
Uggh. Doncha hate it when a word uses the word to define the word? 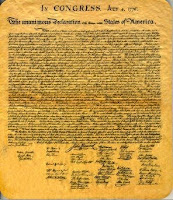 One of the most powerful sentences in the world was created 234 years ago. We hold these truths to be self-evident, that all men are created equal, that they are endowed by their Creator with certain unalienable Rights, that among these are Life, Liberty and the pursuit of Happiness.

In a day and age when society—and the public school system—does all it can to diminish the spiritual core of our founding fathers, the truth can be found in our Declaration of Independence.

Hold these truths to be self-evident…instinctive knowledge.

All men are created equal…all of mankind has these rights.

That they are endowed by their Creator…that God gave each of us these rights.

What are these rights? Life, Liberty, and the Pursuit of Happiness. The right to live. The right to be free. The right to strive for our dreams, goals, aspirations, ownership of land, time to play video games, to beat up our siblings, to climb trees, to knit when we’re 96 years old, and to eat cake with lots and lots of icing.

“I majored in Bible in college. I went to the seminary and I majored in the only thing they teach there: the professional ministry. When I graduated, I realized that I could speak Latin, Greek, and Hebrew, and the only thing on earth I was qualified for was to be the pope. But someone else had the job.” –Anonymous Pastor, Pagan Christianity? by Frank Viola

Okay, so that reminds me (Gina) of a guy I went to church with years ago who wanted to be a youth pastor. He went to seminary, got edumacated, earned a nice shiny diploma, and couldn’t get hired anywhere. Why? He had the head knowledge, even the heart knowledge, but he had no youth pastor skills.

Far too many times we excuse away the pursuit of our dreams because we look at our lives and think, “I don’t even have any good skills.”

The truth is every one of us has skills. From there to here, from here to there, abilities are everywhere. Some have one skill, some have two skills, some have red skills, some have blue skills. Good skills, bad skills, shark skills, plaid skills. Oh, the things we can think up...if only we try.

"A winner is someone who recognizes his God-given talents, works his tail off to develop them into skills, and uses these skills to accomplish his goals." ~Larry Bird

Our Creator gave each of us talents that are natural—inherent. During our family movie night recently, we watched X-Men 3: The Last Stand. Jean Gray was had the inherent talent to be a class 5 mutant--the most powerful level of mutants. Only Professor Xavier put a mental block on those abilities because he knew Jean didn’t have the ability to control her skill. Or he feared she didn't. Because she never had a chance to hone her skills at a younger age, she ended up killing the man she loved and the man who thought he was helping her. Plus she lost her beauty when she went Phoenix-psycho. Word to the the wise, learn from Jean because Elizabeth Arden Prevage can lessen aging but not correct manical wrinkles.

Don't assume that possessing a skill means that skill makes you the Larry Bird of 1980s basketball. Whatever our natually skill (both developed and unrealized), to utilize them to the fullest, we have to find a something strong and stable to hone them.

We must develop those skills. Scripture teaches that the Word of God is a double-edged sword that sharpens us--our skills--to be prepared for good work.

All Scripture is breathed out by God and profitable for teaching, for reproof, for correction, and for training in righteousness, that the man of God may be competent, equipped for every good work. ~2 Timothy 3:16-17

Matt: Mom,I’m out of creative juice.
Gina: Really?
Matt: I know how to end this, though.
Gina, risking being redundant again: Really?
Matt: Live long and prosper.

Serious Question of the Day: What skills do you have and how has God honed them over the years for you to do good work with them?