While we might be convinced God prefers hymns over contemporary praise, or instruments vs. a cappella worship, the truth is we need music the most when the worship band isn't around, the hymnal is still in the back of the pew at church, the CD player stops working, and the batteries in the MP3 player are dead.
Music is appropriate (and necessary) when you're caught between a rock and a hard place, when all the lights have gone out and it just keeps getting darker, when the pressure is so great you think you're going to be squashed like a rotten blueberry. That's when you need to tune your ears to hear the songs of the Spirit.

“You are my hiding place; You shall preserve me from trouble; You shall surround me with songs of deliverance.” Psalm 32:7 NIV

God is the originator of surround sound! Wireless, even!  We just need to turn it on and tune in. What kind of songs does he surround us with? Songs that deliver. The word for deliverance is also translated “escape,” or “to cause to escape.”
The enemy of our souls would like to convince us that sitting around singing songs in the midst of a crisis is foolish and irresponsible. Shouldn't we be doing something? Calling a prayer chain, organizing a rally, or circulating a petition? The frantic need to take action when we're under attack is the same instinct that drives trapped animals to chew off their own legs. And often, our knee-jerk actions leave us crippled.

I'm sure the residents of Judah wanted to do something when they heard the news a huge army was on its way to destroy them, as recorded in 2 Chronicles 20.
Fortunately, Judah's King Jehoshaphat was a God-fearing man. He proclaimed a fast throughout Judah and called upon God for help, for a way of escape from the destruction marching their way.
What do you suppose God told them to do?
Raise an army, institute a draft, send in the Marines?
Construct new and more lethal weapons?
Surrender?
Nope.

Then the Spirit of the LORD came upon Jahaziel son of Zechariah, the son of Benaiah, the son of Jeiel, the son of Mattaniah, a Levite and descendant of Asaph, as he stood in the assembly. He said: "Listen, King Jehoshaphat and all who live in Judah and Jerusalem! This is what the LORD says to you: 'Do not be afraid or discouraged because of this vast army. For the battle is not yours, but God's. Tomorrow march down against them. They will be climbing up by the Pass of Ziz, and you will find them at the end of the gorge in the Desert of Jeruel. You will not have to fight this battle. Take up your positions; stand firm and see the deliverance the LORD will give you, O Judah and Jerusalem. Do not be afraid; do not be discouraged. Go out to face them tomorrow, and the LORD will be with you.'"  2 Chron 20:14-17 NIV

So the next day Jehoshaphat steps out in faith, believing God will do as He said (that's what faith is, after all). He doesn't prep the troops for battle, he organizes a marching band.

Early the next morning the army of Judah went out into the wilderness of Tekoa. On the way Jehoshaphat stopped and called them to attention. "Listen to me, O people of Judah and Jerusalem," he said. "Believe in the Lord your God and you shall have success! Believe his prophets and everything will be all right!" After consultation with the leaders of the people, he determined that there should be a choir leading the march, clothed in sanctified garments and singing the song "His Loving-kindness Is Forever" as they walked along praising and thanking the Lord! And at the moment they began to sing and to praise, the Lord caused the armies of Ammon, Moab, and Mount Seir to begin fighting among themselves, and they destroyed each other! 2 Chron 20:20-22 TLB
Sounds crazy, doesn't it? Put the praise and worship team out in front of the army? But their act of faith to sing and praise when everything in the natural said fight or flee brought about a supernatural deliverance for them.

“Okay,” you're thinking, “But that's Old Testament.”
Try this one.

But at midnight Paul and Silas were praying and singing hymns to God, and the prisoners were listening to them. Suddenly there was a great earthquake, so that the foundations of the prison were shaken; and immediately all the doors were opened and everyone's chains were loosed. Acts 16:25-26 NKJV

Somehow singing seems like the last thing I would feel like doing after I'd been beaten severely and thrown in prison. Crying, whining, pouting, yeah, probably. Singing songs? Probably not. But Paul and Silas were listening to those songs on the inside, songs inspired by the Spirit of God within them, and when they lifted up their voices and sang those songs, God moved. And He didn't just deliver Paul and Silas, all the prison doors were opened, and everyone's chains were loosed. Their songs of deliverance in the night were powerful enough to set the people around them free, too! They literally sang their way out of jail! Don't you want to know what songs they sang? 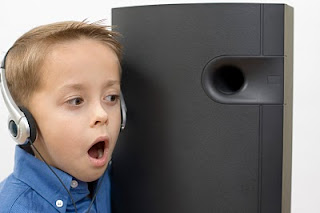 The next time your back is against the wall, and you're tempted to grumble or complain, or you feel so discouraged you can't even turn your frown upside down, tune in to PSLM-327 and sing along with the Spirit. He might surprise you with His broad repertoire of songs. That chorus that keeps running through your head might just be your song of deliverance! In my own life, God has used everything from old hymns I didn't even know I knew to Hillsong ballads, Veggie Tales lyrics, and Pat Benatar's "Hit Me With Your Best Shot" to minister to my spirit and bring me through dark places into victory.
Have specific songs ever created a way of escape for you? Tell us about it!
Posted by Niki Turner at June 13, 2010