We Declare Our Independence

Granny here, to talk about Pilgrim collars and burning bras.

No, really. There’ s a connection. I love history. I will find a connection if it kills me.

When Kevin Bacon's six degrees of separation won't work, I rely on Henry the VIII of England.

In sixteenth century Europe, on the heels of the Martin Luther’s Protestant Reformation, country after country broke with the Roman Catholic church over the rights of the common man to pray directly to God and read the bible rather than depend on the church’s appointed leadership to act as go-between. Only Spain and Italy held on to their ties with Rome. Henry, who cared little for religious freedom and more about having his own way, created the Church of England. Sometimes it leaned toward Catholic traditions, sometimes toward the Protestants.

Woe to anyone in England who didn’t follow Henry’s whims, and they changed more often than his wives!

One neighborhood congregation in northern England became a very strong dissenting church, and led a Separatist movement. The Church of England had no tolerance for this--breaking their laws was punishable by death. Burning at the stake for example. That was a fine example of Christian love, eh?

One leader of the Separatists, William Bradford wrote that each church should have the right to choose its own pastor, discipline its own members, and control its actions and officers by a vote of its members. Crazy stuff!

Eventually these “pilgrims” as Bradford called them in his writings, moved to Holland for its friendlier religious climate. Friendly, yes, but the Englishmen feared losing their identity in Dutch culture .(Okay. here’s where those pilgrim collars come in. Do you remember that painting called The Dutch Masters?).

If you paid any attention in school--besides making Thanksgiving turkey drawings by tracing your hand--you hopefully know the pilgrims arranged for transport and sponsorship with a trading company whereby they would go to the New World and send back whatever they could produce from its land for a period of seven years.

They were so desperate for freedom they were willing to become indentured slaves to find it. Freedom comes at a cost.

Fast forward one hundred and seventy some tough-getting-by-in-a-new-world years to the first Continental Congress and the pretty little city of Philadelphia.

Please don't be surprised that the colonies all had widely differing ideas on rights, loyalties, trade and laws.

Sadly, liberty for European settlers brought disease, destruction and loss of freedom for the native peoples. Like many, my home sits on land once enjoyed as Iroquois village. I don't forget that, but that's for another post.

The first Continental Congress didn’t seriously consider major change until after British retaliation for the Boston Tea Party put Boston under siege. And even at that, southern colonies weren’t sure they wanted to get involved in a problem ‘up north’. Northern colonies did not agree to the use of slave labor. See where I'm going?

Birthing a new nation would bring loss of life, loss of family ties, loss of essential supplies. I’m amazed even now they ever found enough to agree upon and the party politics, closed door discussions, and openly hostile name calling…wait a minute, Congress not getting along? I guess we shouldn't expect things to have changed.

So what about the bras?

I’m getting to that.

Despite all the problems and failings of the United States, nearly four hundred years after the Pilgrims arrived, this country still stands for liberty and freedom. We are always stretching the ideas of personal rights versus the rights of a community, a state, a nation.

But we are quick to stand in support of liberty around the world. We ain't perfect, eh? but I'm proud to be an American and yes the Lee Greenwood song plays in my head every time I get all patriotic and emotional. 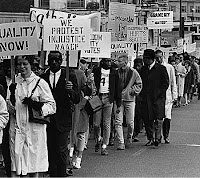 As a young woman during the sixties and seventies, I recall a wave of rebellion and civil disobedience that rattled this country in a way probably not seen since the 1850 and '60s. I learned that the Ku Klux Klan still existed, and I watched replays of college students lie dying on the Kent State campus; I heard reports of radical rebellion in streets of small towns to millions gathering in our nation’s capital.

Bra burners? Never saw it in person. No. And, I never could see where that was going. Did I miss a crucial change in public opinion and new laws passed on that issue (bra wearing, that is...)?

You can bet I am way too cheap to burn any piece of clothing. And hey, you don't want to burn nylon or polyester. Goes up like POOF!

Of course, I’m thinking a new law giving me the freedom to drive
down the street and not see some guy’s boxers or briefs because his pants are below his buttocks WOULD BE NICE.

But I will say that I do appreciate anyone standing up for something they believe in, whether I agree or not, and I'm thankful of the blessing of living in a country where we have the option of civil, orderly disobedience. We can speak out against our leaders and vote our conscience. Thanks to Henry the Eighth's selfishness and the courage of that Separatist church, our country was founded first on religious freedom. Don’t let those freedoms fail.

I believe that the division of church and state does not mean one can tell the other what to do, but that they are to remain as two strong legs to stand on. When one is chipped away, the strength of the other is at jeopardy.

Let's talk history or liberty or, oh, I suppose politics, if you want. Do you think we have enough liberty in the United States? or not enough? Who should draw that line?

If you consider yourself a fan of history, a fan of liberty, or you just like a superb mini-series now and then, I hope you've had or will have the pleasure to watch HBO's JOHN ADAMS. I can't recommend it enough.