BEAUTY AMONG THE RUINS by J'nell Ciesielski, Reviewed by Rebecca Maney 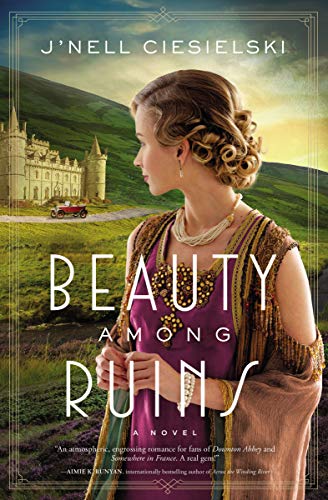 "You are the most extraordinary inconvenience that has ever happened to me."

Truer words were never spoken from the mouth of Alex MacGregor, known in the surrounding area as Lord Strathem, a virtual hermit who rarely appeared in public. When Alex agreed to convalesce wounded soldiers within the walls of his dilapidated Scottish castle, he never expected an American heiress to arrive amongst the nurses aides; Lily Durham was all joy, and sunshine, and eternal optimism wrapped up in a bossy little package with plenty of eye-catching ribbons and bows. If only she would leave well enough alone . . . if only she would leave him alone. If only.

Sent by her parents to Scotland to visit family; certainly never expecting a war to confine her there for such a length of time, Lily Durham has found a new sense of purpose, helping others, serving as a nurses aide . . . .even if the matron did assign her the most unpleasant tasks imaginable; who would have thought that Lily Durham would be ruining formal dancing gloves while scrubbing bed pans. But as she did just that, one of many charming conversations with the formidable Alex MacGregor took place . . . outside on the lawn, scrubbing bed pans.

"Oh my! Two jokes in one day. Pace yourself, sir or I'll begin to think you have a sense of humor buried deep inside after all. "

Alex MacGregor has much more than a sense of humor buried deep inside, he has a heart that longs for another, someone to come alongside, to share both burdens and victories; someone who understands him and his beloved heritage, someone who will fight to the end to save it. Has he found her . . . .scrubbing bed pans?

Such "beauty among ruins"!
*I purchased this book and was under no obligation to review, or provide a positive review.

BackCover Blurb:
In Ciesielski’s latest sweeping romance, an American heiress finds herself in Scotland amid the fallout of the Great War, and a wounded Scottish laird comes face-to-face with his past and a woman he never could have expected.

American socialite Lily Durham is known for enjoying one moment to the next, with little regard for the consequences of her actions. But just as she is banished overseas to England as a “cure” for her frivolous ways, the Great War breaks out and wreaks havoc. She joins her cousin in nursing the wounded at a convalescent home deep in the wilds of Scotland at a crumbling castle where its laird is less than welcoming.

Alec MacGregor has given his entire life to preserving his home of Kinclavoch Castle, but mounting debts force him to sell off his family history bit by bit. Labeled a coward for not joining his countrymen in the trenches due to an old injury, he opens his home to the Tommies to make recompense while he keeps to the shadows. But his preference for the shadows is shattered when a new American nurse comes streaming into the castle on a burst of light.

Lily and Alec are thrown together when a series of mysterious events threatens to ruin the future of Kinclavoch. Can they put aside their differences to find the culprit before it’s too late, or will their greatest distraction be falling in love?