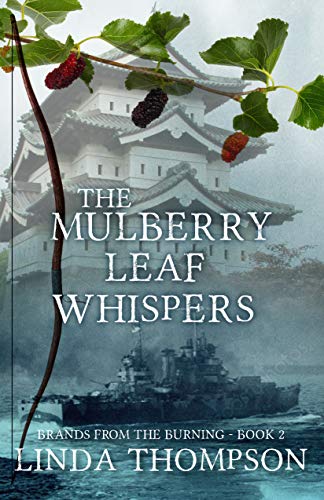 "Fear not. Deusu is with thee."

As the only Christian residing within the powerful Buddhist House of Matsuura, Omura Sono feels more more like a prisoner than a blushing new bride, pushed into marriage by her dying father as a gesture of peace between warring families. Efforts to share her faith among members of her new family rapidly disappear, her hopes of happiness as faint as wisps of the horrid ceremonial incense that permeate every occasion, for her new mother-in-law has no intention of honoring any pre-nuptial agreements. Sono is well aware that her husband Hisanobu, who at times appears to adore her, remains first and foremost an imposing samurai warrior, holding her very lifeblood at the tip of his sword. Ultimately, this truth reaches a unwanted climax, the fate of the entire Matsuura lineage is at stake.

Years later, a descendant of the ancient House of Matsuura painfully realizes that he is the sole survivor from a Japanese ship which sank during the horrific battle of Midway. Akira is so ashamed that he didn't die an honorable death that he tries to take his own life on more than one occasion. Providentially, his path crosses that of another another veteran from that fateful night, demonstrating that the power of the Holy Spirit is capable of crossing centuries, beckoning Akira's very soul with the whisper of forgiveness, demonstrating that faith has the courage and strength to revolutionize multiple generations.

Honestly, my own ignorance of Japanese culture was an initial stumbling block as I began to read this story; some of Sono's experiences were barely comprehensible through the lens of modern mores. Thankfully, the author's deep undercurrent of unshakeable faith served as a steady beacon, lighting the path between her two primary characters, as the actions of one left an eternal imprint on the other. What a lovely, lovely story and one that I will readily recommend to those who desire to go deeper in their relationship with "Deusu" by reading historical fiction.

"This mulberry leaf
Whispers a lonesome warrior's
Words of deep longing.
Dearest, when will our arrows
Take flight side by side again?"

BackCover Blurb:
A WWII Japanese naval officer. The teenage daughter of a legendary Christian samurai. Three centuries separate them, but a crucial question binds their destinies together.

Which lives have value?

In the highly anticipated sequel to her award-winning debut novel, The Plum Blooms in Winter, Linda Thompson provides a riveting story inspired by true events.

"Splendid story!... Rivals Shogun with its sweeping story of passion and faith, of survival and hope.... Be prepared to be enriched, moved and deeply satisfied." - Jane Kirkpatrick, award-winning author of Something Worth Doing

"Gorgeous... not-to-be-missed..." - Sarah Sundin, bestselling and Carol Award-winning author of When Twilight Breaks and the Sunrise at Normandy series

1587. Bartered off in a peace agreement to the ancient enemies of her illustrious house, is Sono a war prize, a hostage, or a bride? One hope sustains her. If she can provide an heir to the dashing husband she just met, she'll ensure decades of peace for the beloved family she was forced to leave behind. But when a dark secret threatens her desperate bid to purchase their security, she must rise to a battle she never dreamed she'd fight.

1942. Akira Matsuura’s naval vessel explodes under enemy fire. Everything he has lived for disappears in flames with it. His command, his crew, his future—all lost. Worse, his honor is eternally decimated. A prisoner’s life is of value to no one. Least of all to himself. But a stunning twist reveals his family’s secret shame. Can a long-buried truth provide the vital spark that reignites his will to live?

Thrill to two poignant journeys of courage, duty, and sacrifice, deftly woven through the centuries to inspire with dynamic faith that conquers despair.