THE PIANO TEACHER by Kristie Self, Reviewed by Kim 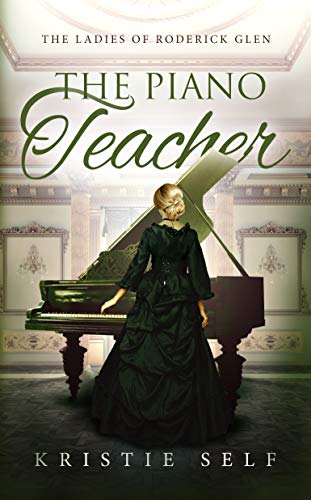 The Piano Teacher by Kristie Self reminded me of a sweeping drama you might watch on TV with a writing style reminiscent of Julie Klassen. I enjoyed the setting, which for the most part takes place in a small village. There was an entire cast of people to get to know and learn of their stories. I am assuming that many of these characters will eventually get their own stories as this is book 1 of The Ladies of Roderick Glen series.

I enjoyed Melody and Henry’s story. At first, I did not think Henry would make a great male lead, but the growth of his character made me change my mind. And the villain in their story was just plain creepy and even worse than I thought after all of his secrets were revealed.

I did feel like this story was a bit too long and there were a lot of characters to keep up with. I felt like this book could have easily been split into two books, but since this is the first in the series, I am sure it was so that we could get to know all the characters that will eventually have their own stories.

If you enjoy Julie Klassen stories, you should give The Piano Teacher a try.
*I received a complimentary copy of this book. All opinions are my own. The faith thread was light. 3 stars.

BackCover  Blurb:
She longs to escape a dreadful secret from her past, but can she ever run far enough to truly forget?

Melody Creston is left penniless following the death of her father. Desperate to escape the threat of an unwanted and dangerous marriage, she flees to the small village of Roderick Glen in the English countryside to begin life anew as a pianoforte teacher. She is hired to teach the daughter of the Earl of Rockingham and soon falls in love with the quaint village and its quirky residents. Despite her newfound freedom, she is haunted by the secrets of her past, as well as the constant fear that she will be discovered and forced to return to London.

Lord Henry Roderick is the younger son of the Earl of Rockingham and has no desire to obey his father’s wishes and help his brother attend to their family’s estate, Cheswick Park. Carefree and fun-loving, his reputation as a scoundrel often hides the true nature of his heart. Upon meeting Melody, he is instantly captivated by the beautiful piano teacher, and is determined to do whatever it takes to win her heart and become the man she needs.

Melody is intrigued by Henry and encourages him to follow his own path as he searches for his purpose in life. Shy and reserved, she is reluctant to admit her feelings for him, but as they grow closer, he begins to break through the barriers of fear and mistrust that surround her heart. As their love deepens, she becomes increasingly afraid of what will happen when he learns the truth of her turbulent past. Can love forgive a secret hidden in the shadows when it is exposed to the light of day?

Brimming with laughter, love, emotion, and heart, this first book in The Ladies of Roderick Glen series introduces us to the citizens of Roderick Glen as they follow their dreams and discover that one’s heart is always happiest near the friendly faces of home.
February 2021
Available in digital ebook and paperback at Amazon
Posted by Debra E. Marvin at February 11, 2021