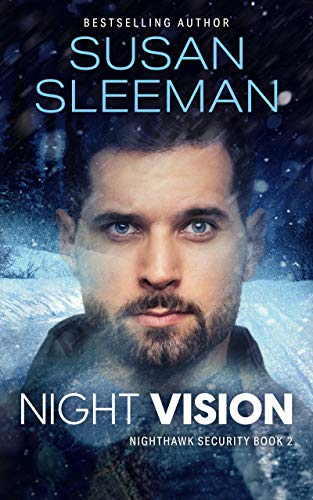 Once again, Susan Sleeman has shown why she’s one of my favorite romantic suspense authors. She’s a pro at creating fantastic characters who are courageous, realistic, and engaging. She then places them in precarious situations where they have to use their brains and skills to survive. She also puts me on the edge of my seat wondering what is going to happen next.

I’m loving this series with the five Byrd brothers who have formed the Nighthawk Security team. Night Vision stars Brendan Byrd who rescues Jenna Paine at the cabin she’s staying at over the Christmas holiday. The brothers then have to band together to keep her safe and figure out who is targeting her and why.

Sleeman really ramped up the action in this story and kept the suspense coming. There’s plenty of intrigue, suspense, and a dash of romance to keep your heart pounding. With the addition of some inspiration woven carefully and intrinsically into it, it’s the perfect read if you’re in the mood for a great suspenseful tale. I’m looking forward to the next book in the series. 4.5 stars
*I voluntarily reviewed a complimentary copy of this book. All opinions are my own.

BackCover Blurb:
A woman on the run with no one to trust…

When a Christmas vacation at a snowy Mt. Hood cabin turns into a home invasion, Jenna Paine will do anything to protect her four-year-old daughter. Even if it means putting Jenna's own life on the line. Which she must do when the intruder threatens to kill her. She knows the invader will stop at nothing to take her out, and she can’t let him get close or he might harm her daughter too.

She wants to disappear, but she can’t survive on her own.
In fact, Jenna would be dead now it Brendan Byrd of Nighthawk Security hadn’t come to her rescue during the invasion. Former Army Delta Force and county deputy, Brendan doesn’t think twice about offering his agency’s protection services for Jenna and her precious daughter. What he does think twice about is opening his heart to Jenna only to have it broken again. But as the threats escalate, he must hone his vision where she’s concerned, figure out this crafty attackers identity, and in the process, find a way to keep her alive.