THE INN AT HIDDEN RUN by Olivia Newport, Reviewed by Trixi Oberembt 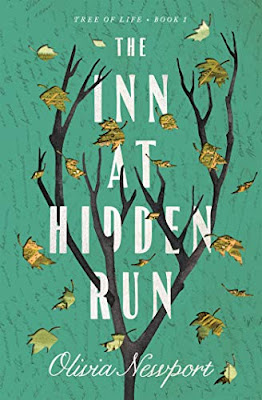 “Do you believe in calling? Choosing your path because your path chooses you, or because God puts it before you so plainly you can't walk any other way?”~Meri (pg 160)

First off, I didn't know this was a dual-timeline story when I started reading it. That doesn't bother me in the least, it was a pleasant surprise! Secondly, I think I was more invested in the historical portions of this book rather than the modern day setting. Not because one was better than the other, but because I was fascinated to learn about the yellow jack or yellow fever epidemic in Memphis, TN circa 1878 and how it impacted Eliza Davies's life. She had a heart especially for children orphaned when their parents died from the disease. She was selfless in giving of herself, helping the nuns in any way she could other than caring for the sick, running errands and taking as much of the burden off the Sisters as possible. I admired her strength and devotion to being the hands and feet of Christ to those suffering. I don't know if I could have done the same; it would be heartbreaking to watch so many people die everyday knowing you could only do so much to comfort them.

Then there's Meri Davies running from her family who insists that all members be doctors of some kind. For them, there were no other choices and she especially feels pressure after she flunks out of med school. She wants to be invisible and unknown so she can figure out how to make her real dreams come true; those her family would never understand! Enter Jillian and Nolan who see a wounded soul who needs help to face the hard stuff of life. I think at times they went a little overboard, which irritated me. Eventually, they win both Meri and me over! In the end, they piece her family history together and Meri has a better understanding of her roots and calling in life.

Even as often as the characters frustrated me, it was a better story than I thought it would be. In my opinion, the ending was the best! I was a little disappointed that there wasn't a stronger faith theme, however. That being said, it's a story of one families journey to find their place in the world and the strength they found in each other, no matter what life path they chose!

Back Cover Blurb:
A Father-Daughter Genealogy Team Link Present to Past on Family Trees

Meri’s family has been producing doctors for so many generations that no one remembers why, so when she flunks out of medical school, she runs as far from her parents as she can get. In the small mountain town of Canyon Mines, Colorado, she takes a job at the Inn at Hidden Run B&B. And waits. It’s only a matter of time.

What she doesn’t count on is genealogist Jillian Parisi-Duffy and her father, Nolan, having her back when it takes everything she has not to bolt again but to stay and face the truth that only unfolding her family’s history will reveal. While Nolan works on keeping Meri calm—and in town—Jillian pulls out of her gems of information she doesn’t know she has and arranges the puzzle pieces.

But none of that changes the fact that Meri’s family is closing in to haul her back to her “real” life. When their arrival inflames tensions and Meri finally does bolt, Nolan and Jillian may be out of time.

The Inn at Hidden Run is the first book in the Tree of Life series. Readers will come back to backdrop of a lovely mountain town of Canyon Mines again and again to explore and celebrate unforgettable family stories that inspire them to connect with their own family histories and unique faith journeys.