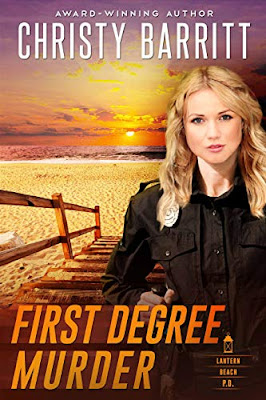 "Things on Lantern Beach were never simple", especially for Police Chief Cassidy Chambers. Dead bodies keep turning up; this time the skeletons appear to have been hurriedly buried in the sand on a deserted stretch of rugged shoreline. Sadly, corpses can still tell a story, and Cassidy is convinced that the deaths are related to other strange happenings in her little town; especially when the cult at Gilead's Cove and its charismatic leader seem to hover around the edges of what can/cannot be proven. And to make matters worse, strange text messages lead her to believe that someone knows her past.

Join Cassidy, her husband Ty, and other members of their tight knit circle of friends and co-workers, as they frantically try to unravel what has transpired in their idyllic beach community, before there are more first degree murders.

*I purchased this book and was under no obligation to provide a review.

Back Cover Blurb:
Threatening messages from an unknown source. Shallow graves with unidentified bodies. A friend facing impending peril.
Police Chief Cassidy Chambers longs for a break from the recent crimes plaguing Lantern Beach. She simply wants to enjoy her friends’ upcoming wedding, to prepare for the busy tourist season about to slam the island, and to gather all the dirt she can on the suspicious community that’s invaded the town.
But trouble explodes on the island, sending residents—including Cassidy—into a squall of uneasiness. Cassidy may have more than one enemy plotting her demise, and the collateral damage seems unthinkable.
As the temperature rises, so does the pressure to find answers. Someone is determined that Lantern Beach would be better off without their new police chief. And for Cassidy, one wrong move could mean certain death.