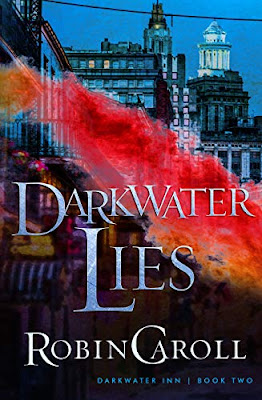 "She wasn't quite sure how she was going to handle what was about to become an international incident, but Adelaide was certain of one thing: she was about to find out."

Returning to the Darkwater Inn after a restorative sabbatical in England, Adelaide Fountaine's role as general manager is once again interrupted by tragedy; a robbery gone wrong, with no survivors. Apparently, after hacking into the inn's security system, someone had successfully pilfered a priceless tiara from the hotel safe. There are more questions than answers, and while the two men in Adelaide's life are both determined to help her find them, her mixed feelings about how each of them can fit into her future, is still as confusing as ever.

*I bought this and was under no obligation to review.

BackCover Blurb:
Adelaide Fountaine, general manager of the Darkwater Inn, has just returned to New Orleans from a six-month sabbatical in Europe. She's rested and ready to take on the inn's busiest season: Mardi Gras. But Adelaide hardly has time to unpack before a jewel heist interrupts a visit from foreign royalty. A priceless tiara goes missing from the hotel's safe, and three people are left dead.
Detective Beau Savoie discovers the robbery was an inside job, making everybody at the Darkwater Inn a suspect--including Dimitri, the son of the inn's owner and Beau's competition for Adelaide's heart.