THE LINE BETWEEN by Tosca Lee, Reviewed by Paula Shreckhise 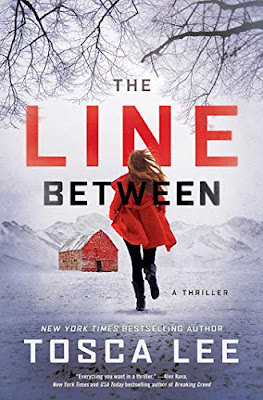 The Line Between by Tosca Lee is a riveting page turner in the dystopian genre.

A cult, an attack on the power grid and a mysterious illness that threatens the population. A page out of the apocalypse! Hold on ...you are in for a bumpy ride.

Wynter Roth is trapped in a cult along with her sister, Jaclyn, their mother, Sylvia and Jaclyn’s daughter, Truly. This exceptional novel delves into the workings of a cult and the devious mind behind it. Did you ever wonder what it would be like to be in a cult against your will with no way out? How would you cope when the power grid goes down? Put yourself in Wynter’s shoes as she finds herself a fugitive. Who can she trust and how can she get a valuable item to the right authorities? She reluctantly teams with Chase Miller out of necessity. During a snowstorm, she navigates back roads from a Chicago suburb towards a lab at a campus in Colorado.

I would classify this as a clean read with a sprinkling of faith. The book leaves enough information unresolved for another book or two!

This is my first book by Tosca Lee and I will be sure and look for her others.

*I won this ebook from a contest run by Suspense Sisters. I was not required to give a favorable review. All opinions are my own.

BackCover Blurb:
In this frighteningly believable thriller from New York Times bestselling author Tosca Lee, an extinct disease re-emerges from the melting Alaskan permafrost to cause madness in its victims. For recent apocalyptic cult escapee Wynter Roth, it’s the end she’d always been told was coming.

When Wynter Roth is turned out of New Earth, a self-contained doomsday cult on the American prairie, she emerges into a world poised on the brink of madness as a mysterious outbreak of rapid early onset dementia spreads across the nation.
As Wynter struggles to start over in a world she’s been taught to regard as evil, she finds herself face-to-face with the apocalypse she’s feared all her life—until the night her sister shows up at her doorstep with a set of medical samples. That night, Wynter learns there’s something far more sinister at play and that these samples are key to understanding the disease.
Now, as the power grid fails and the nation descends into chaos, Wynter must find a way to get the samples to a lab in Colorado. Uncertain who to trust, she takes up with former military man Chase Miller, who has his own reasons for wanting to get close to the samples in her possession, and to Wynter herself.
Filled with action, conspiracy, romance, and questions of whom—and what—to believe, The Line Between is a high-octane story of survival and love in a world on the brink of madness.