ON A COASTAL BREEZE by Suzanne Woods Fisher, Reviewed by Rebecca Maney 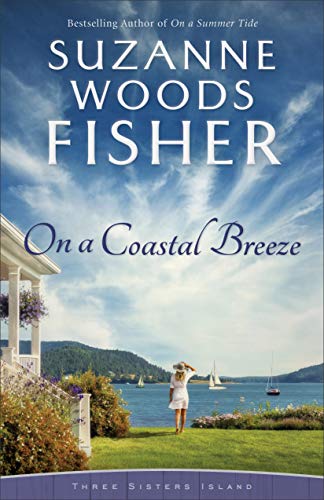 Oh, he meant literally, alright. When Three Sisters Island's new pastor lands deftly on two feet, with the predicted parachute trailing behind him, the island residents are automatically intrigued. Everyone, but Maddie Grayson, that is. She cannot believe that her childhood nemesis is . . . . first of all a preacher, and second of all, going to be living and working on the main floor of the building which houses her newly formed counseling practice. Of all the nerve; Ricky O'Shea.

Of course, the island's small church community grows quickly; Pastor O'Shea is a gifted speaker and has the ability to preach God's Word in the simple, genuine kind of way that appeals to his audience. As Maddie finds it harder and harder to hold on to juvenile grudges, she is also distracted by the unrest within both of her sisters. It's turning out to be quite a summer on Three Sisters Island.

Written with the ease of a seasoned author, "On a Coastal Breeze" captures the essence of authentic, as each sister struggles to conquer her own invisible fears; feeling totally inadequate, incessantly driven, or incredibly inept. Filled with a surprising amount of wisdom and depth, this story is a solid, enjoyable, and quite romantic addition to the series.

"Did you know that 'fear not' is mentioned three hundred and sixty-five times in the Bible? One for every day."

*I received a copy of this book from Baker Publishing through Interviews and Reviews.

BackCover Blurb:
For Madison Grayson, life is good. Newly licensed as a marriage and family therapist, she can't wait to start her practice. Despite the unfortunate shortage of eligible bachelors on the island--they're all too young, too old, or too weird--Maddie feels like she's finally found her sweet spot. Not even one panic attack in the last year. Not one.

And then Ricky O'Shea drops in. Literally. Floating down from the pure blue sky, the one man in the world she hoped never to see again--the one who'd been her archnemesis from kindergarten through her senior dance--parachutes into town, landing on Boon Dock, canopy draping behind him like a superhero. Ricky O'Shea. Now Pastor Rick, the new minister on Three Sisters Island.

With wit and a bit of whimsy, bestselling author Suzanne Woods Fisher invites you back to Three Sisters Island where family, forgiveness, and a second chance at love await.