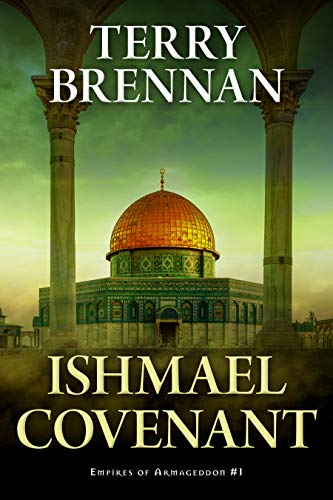 Diplomatic Security Service Agent Brian Mullaney's confidence is at an all time low; struggling to accept an overseas assignment to Israel, he is certain that extended time away from his family will cause irreparable damage to his marriage. He loves his wife. He loves his daughters. He loves his country.

It's soon evident that protecting U. S. Ambassador Atticus Cleveland and his daughter is unlike any challenge that Brian has faced during his extensive career. Not only is the Ambassador navigating through an unprecedented, and quite unexpected Middle East peace treaty; referred to as the Ishmael Covenant, but Cleveland has also been entrusted with an ancient treasure; a prophecy of sorts, which must be guarded at all costs. Lives are at stake and the enemy is formidable.

The author of this book demonstrates an astounding knowledge of the Middle East; past, present, and possibly even its future. That knowledge, when paired with Jewish history and the promises of Scripture, makes this story's blending of political versus spiritual forces extremely fascinating, but also highly complicated. It was those complexities that seemed to weight down its astounding core. However, to write it any other way would have compromised its integrity and made the book much less memorable. Because its readers will tell you, the "Ismael Covenant" is quite a memorable read!
*I received a copy of this book from "More Than a Review". The opinions stated above are entirely my own.

His marriage in tatters and his career ruined by lies, Diplomatic Security Service agent Brian Mullaney is at the end of his rope. Banished to Israel as punishment by his agency, he's assigned to guard a US ambassador and an insignificant box. Little does he know that this new job will propel him straight into a crisis of global proportions.
Inside the box is a messianic prophecy about the fate of the world. And a dark enemy known as The Turk and the forces of evil at his command are determined to destroy the box, the prophecy, and the Middle East as we know it. When Ambassador Cleveland gets in the way, his life and his daughter's life are threatened--and Mullaney must act fast.
Now agents of three ancient empires have launched covert operations to secure nuclear weapons, in direct defiance of the startling peace treaty Israel and its Arab neighbors have signed. And a traitor in the US State Department is leaking critical information to a foreign power. It's up to Mullaney--still struggling with his own broken future--to protect the embassy staff, thwart the clandestine conspiracies, and unmask a traitor--before the desert is turned into a radioactive wasteland.

Fans of Joel C. Rosenberg, Steven James, and Ted Dekker will relish the deadly whirlpool of international intrigue and end-times prophecy in Ishmael Covenant--and will eagerly await the rest of this new trilogy.