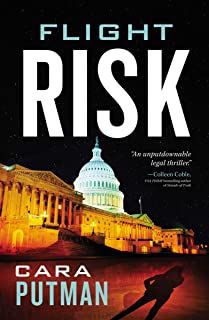 "Even in the absence of peace, she had a choice. Trust God or take control."

Savannah Daniel's already demanding schedule is thrown into overdrive following the publication of a newspaper article citing her ex-husband's patterns of over-seas travel as proof of his involvement in a high stakes trafficking scheme, causing her young niece (Dustin's daughter) to crumble. Shortly after the expose's release, two of her law clients fall under suspicion by the F. B. I. following a Washington, D. C. plane crash; ironically, Savannah's ex-husband and one of his associates were passengers on that very plane. Contributing even more stress is the fact that the journalist who broke the original story, Jett Glover, is pushing Savannah for more details about Dustin's supposed business partners. It's a train wreck of circumstances, just waiting to happen. And it does.

"Flight Risk" has some amazing story threads; what initially appear as totally disconnected scenarios, eventually merge together rather brilliantly. Even though the multiple demands on Savannah's time are mentally exhausting, and the cautious relationship that she forms with Jett doesn't really have the space it needs to flourish, the author ends really, really well . . . for she proves that the truth is worth Jett's tireless efforts and that Savannah's heart can risk taking flight a second time.
*3.5 stars. I purchased a copy and was under no obligation to review or provide a positive review.

Savannah Daniels has worked hard to build her law practice, to surround herself with good friends, and to be the loyal aunt her troubled niece can always count on. But since her ex-husband’s betrayal, she has trouble trusting anyone.

Jett Glover’s father committed suicide over a false newspaper report that ruined his reputation. Now a fierce champion of truth, Jett is writing the story of his journalism career—an international sex-trafficking exposé that will bring down a celebrity baseball player and the men closest to him, including Savannah’s ex-husband.

When Jett’s story breaks, tragedy ensues. Then a commercial airline crashes, and one of Savannah’s clients is implicated in the crash. Men connected to the scandal, including her ex, begin to die amid mysterious circumstances, and Savannah’s niece becomes an unwitting target.

Against their better instincts, Jett and Savannah join ranks to sort the facts from fiction. But can Savannah trust the reporter who threw her life into chaos? And can Jett face the possibility that he’s made the biggest mistake of his life?