A PICTURE OF HOPE By Liz Tolsma, Reviewed by Paula Shreckhise 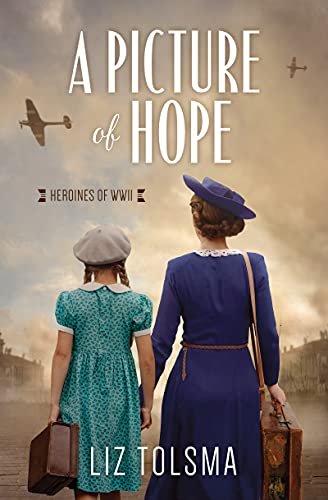 It is just after the Normandy Invasion and journalist Nellie Wilkerson wants to be at the front of the action to bring the truth to the Americans back home. After sneaking her way into France, she finds herself behind enemy lines and witnessing much more than she bargained for. “What is more important is that I captured the entire story in one shot. And that was my intention. So that, without a single word, the world would know what Hitler is doing. And that there is hope in the midst of the evil of this world.”

Teaming with resistance fighter Jean-Paul, they come upon Claire, a frightened, *Mongoloid child hiding from the dreaded Germans. They find refuge at a convent with three nuns. They learn much about their faith and hope from an elderly Sister, Maria-Theresa. “This suffering is meant to make our souls long for heaven. This world wearies us and weighs us down. Oh, but there is another world where we will never be weary and where we will never long for anything better.”

There is much danger as they all flee to Switzerland. Ms Tolsma showcases the real heroes and heroines of WWII as she tells the story of Nellie, Jean-Paul, Claire and their companions. The real people and real-life situations are woven seamlessly into the journey from oppression, as well as a journey of faith. What seems like hopelessness turns into a hope for the future.

Well done story opening yet another window into the events of WWII that we should never forget.
*I received a complimentary copy of this book from the author. I was not required to give a favorable review. All opinions are my own.* I give this 5 stars and a strong faith thread.

Blog note: *Mongoloid is an historical term used in this time period for children with Down Syndrome or other developmental concerns. It was unfortunately also used for some people with Central Asian ancestry and is a term no longer in use but reflects the book's setting.  Liz Tolsma's heart for people with developmental disabilities is very personal and we appreciate her work to showcase this sad portrait of history.

BackCover Blurb:
A Photojournalist Risks Her Life to Save a Very Special Child

Journalist Nellie Wilkerson has spent the bulk of the war in London, photographing mothers standing in milk lines—and she’s bored. She jumps at the chance to go to France, where the Allied forces recently landed. There she enlists Jean-Paul Breslau of the French underground to take her to the frontlines. On the journey, they stumble upon a great tragedy, leaving a girl with special needs being orphaned.

Can Nellie and Jean-Paul see the child to a safe haven while being pursued by the Nazis, who are pressed by the advancing Allies and determined to destroy all they can before they flee?