AUTUMN BY THE SEA by Melissa Tagg, Reviewed by Winnie Thomas 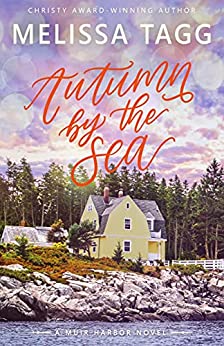 With a setting in Maine and colorful, realistic, and endearing characters, Melissa Tagg has crafted a compelling start to her new Muir Harbor series. I immediately became wrapped up in this tale and intrigued by the storyline and characters. The main characters, Sydney Rose and Neil MacKean, both had traumatic pasts they had worked to overcome, and together they had a wonderful charisma. Sydney is compassionate and sweet but wants to find out who she really is and where she belongs. Neil is the consummate hero—hard-working, helpful, flannel-wearing, and Scottish. What more could we ask for in a hero? The stellar cast of supporting characters added much to the story, and I have a feeling some will be starring in their own books soon.

“From her place of deepest hurt, God had brought something amazing. Something she never could’ve expected.”

This story has intrigue, suspense, a big dash of romance, and a big dose of inspiration and healing. There’s a bit of a cliffhanger at the end with some loose ends that I’m sure will be all tied up in future books in the series. I recommend this to those who enjoy well-written, absorbing contemporary romance.
* 4.5 stars. I voluntarily reviewed a complimentary copy. All opinions are my own.

Abandoned as a toddler, Sydney Rose has spent years wondering who she really is, homesick for a life she's never lived. When a private investigator crashes into her world, she finds herself heading to a tiny seaside town in Maine to meet a woman named Maggie, who's searching for the granddaughter she lost decades ago.

If not for Maggie, Neil MacKean might still be back in Scotland, bereft and alone. Instead, he has a full life in Muir Harbor with an adopted family he loves and a blueberry farm to run. But the farm is struggling and strange occurrences have him concerned. Worse, Maggie's once again caught up in the past, convinced she's finally found her long-lost granddaughter.

Worried for Maggie, Neil is suspicious of the city girl who shows up at the farm. But there's something about Sydney that tugs on him, drawing out secrets he never meant to share. While Neil grapples with the future of the farm, Sydney wrestles with a past that's messier than ever. Together, they're pulled into a mystery complete with a centuries-old legend, unexpected danger . . . and a love as deep and wild as the sea.

Larkspur Press, Sept 2020
Available in digital ebook and paperback:
Buy Autumn by the Sea at Amazon
Posted by Debra E. Marvin at October 16, 2021