A VIEW MOST GLORIOUS by Regina Scott, Reviewed by Paula Shreckhise #ReleaseDay 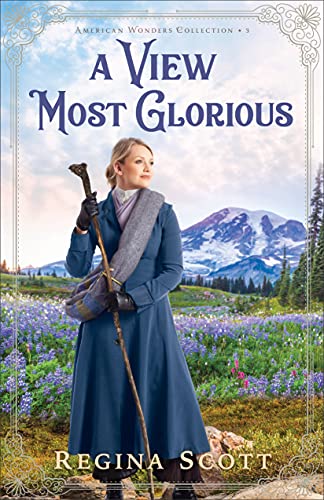 “White tufts of clouds lay like sheep in the valley below. Rivers wound silver through the hills on their way to the blue waters of Puget Sound.”

Ms. Scott brings the beauty of Mt. Rainier to the page in a tale of a determined woman.

Cora wants to do something extraordinary in the name of Women’s Voting Rights. She also does not want to marry the disreputable man that her mother has chosen for her. If she makes the difficult climb to the summit of Mt. Rainier, she will not have to marry Cash Kincaid.

Nathan Hardee is a mystery. He was once part of Tacoma society but now just longs to escape bad memories by living high in the mountains. He agrees to guide Cora and her stepfather Winston on the climb.

The characters come to life and some favorites are Winston, the stepfather who has Cora’s best interests at heart and supports her. And Waldo, friend and mentor to Nathan and a bit of a matchmaker.

There are dangers to be found, not to mention an interfering mother and an unwelcome suitor. But there is also beauty of creation and a time to rely on God. Cora: “Thank you, Lord, for all this, for allowing me to see, to feel. It is truly a view most glorious.”

This is my favorite from this series American Wonders.
*I won this book from Library Thing. I was not required to give a favorable review. All opinions are my own.* 5 stars and a strong faith thread.

BackCover Blurb:
Reluctant socialite Coraline Baxter longs to live a life of significance and leave her mark on the world. When her local suffragette group asks her to climb Mount Rainier to raise awareness of their cause, she jumps at the chance, even though she has absolutely no climbing experience. If she can do it, any woman can do it. And after her mother issues an ultimatum--that Cora marry the man of her mother's choosing if she is not successful--Cora must do it. But she can't do it alone.

Noted mountain guide Nathan Hardee initially refuses to help Cora, but has a change of heart when he sees what is at stake. He knows enough about the man Cora's mother has chosen to know that the headstrong young woman should have nothing to do with him, much less marry him.

Climbing Rainier will require all of Cora's fortitude and will lead her and Nathan to rediscover their faith in God and humanity. These two oners make unlikely partners in righting a wrong and may just discover that only together is the view most glorious.