TRACE OF DOUBT by DiAnn Mills, Reviewed by Rebecca Maney 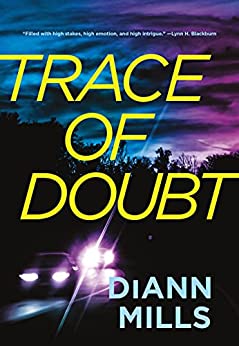 Arriving in the small town of Valleysburg, Texas after spending nearly half of her life in prison for murdering her brother-in-law, Shelby Pearce wore no rose-colored glasses, she knew it would be difficult to start over. She just hadn't counted on someone wanting her new life to end before it even began. In spite of the generosity of a few; after all, she did have a lovely place to live and a job, Shelby couldn't help but continue to watch over her shoulder for the person or persons who clearly were planning her demise. And what was up with her closest neighbor, Denton McClure, was he just being neighborly or did ulterior motives lurk underneath that nice-guy persona?

F. B. I. Special Agent Denton McClure's presence in Valleysburg was no accident. He was convinced that Shelby Pearce not only took the life of her sister's husband, but absconded with the thousands of dollars in the case that remained unaccounted for. Shocked at the poise and humility emanating from the very lovely grown-up version of the criminal he remembered from his rookie days, Denton found himself questioning a lot of things about the case. Clearly there was more to the story, and Shelby knew it.

Bravo! "Trace of Doubt" is quite an intriguing story; boasting multiple twists, turns, knots and loops from the very beginning until the very end. In addition to the suspense, there's also an impressive amount of inspirational depth, tracing the transformation of one who had everything to lose and nothing to gain, into a woman whose simplistic faith stands firm against all odds, even as the most predictable outcome could very well demand the ultimate sacrifice. And the icing on the cake? A very sweet romance between two very unlikely candidates.

"Why do I remember
The sins that stalk my soul?
Why can't I hold on to
Forgiveness that makes me whole?
Ashes rise to steal my breath.
I choke from drowning fear.
Help me, Lord, to cling to you
In never-ending prayer."