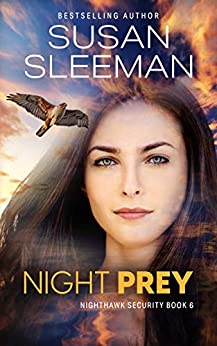 “A plane that never left the tarmac couldn’t crash. But it would never soar, either. He wanted to soar.”
Night Prey is the newest book by one of my favorite romantic suspense authors, Susan Sleeman. Her books are the perfect blend of suspense, intrigue, romance, and inspiration, and I love learning new tidbits about law enforcement and security. With meticulous research and interesting explanation of criminal investigation procedures, Sleeman’s books are always a fount of knowledge. The characters are well-drawn and colorful. Malone Rice and Ian Blair are the main characters in this book, and I connected with them early on and enjoyed seeing their relationship grow as they tackled the mystery involved. The many twists and turns in the story kept me engrossed and guessing.

Night Prey is the culmination of Sleeman’s six-book Nighthawk Security series, but it also sets up the beginning of her next series, Steele Guardians. These books are easily read alone but are so enjoyable read in succession. Many of the characters carry over through the books of the series, and even into the next one. I would recommend this book to those who enjoy well-written romantic suspense.

* 4.5 stars. I voluntarily reviewed a complimentary copy. All opinions are my own.

BackCover Blurb:
She lived for upholding the law…
Defense attorney, Malone Rice, doesn’t want to go to her fifteen year class reunion. Attending means running into her former high school flame, now Portland police detective, Ian Blair. But when the committee decides to honor her for her pro-bono work with homeless teens, she knows it would be churlish not to attend. She will have to go and make the best of it.

But now the law won’t save her.
As expected, Ian attends the reunion, but what Malone doesn’t expect—could never expect—is that Ian would find her standing over their classmate’s dead body. Or that she would still have feelings for the once bad-boy of their high school. Ian’s struggling too, between arresting Malone for murder and his age-old attraction to her. He walks a tightrope, until evidence surfaces that the real killer’s still out there, and Malone becomes his prey. Can Ian overcome his feelings to focus and uncover the truth before the killer strikes again and Malone ends up dead?