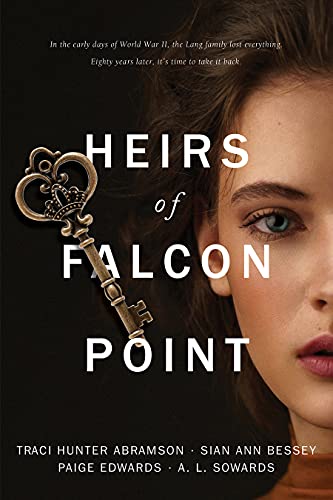 Four fantastic authors collaborated on this absorbing tale set in Austria during WWII and contemporary times. I’m sure it took a lot of cooperation and planning, because the different parts of the story and the characters were seamlessly merged.

With historical elements, suspense, action, a dash of romance, and inspiration, this tale will appeal to many readers. It’s well-paced, full of twists and turns, and populated by colorful, realistic, well-drawn characters. The Lang family and their descendants are exemplary in their love of history and family, and their story is absorbing and poignant.

I’ve read other books by some of these authors and enjoyed them very much. I’m eager to read more of their works.
*4.5 stars I voluntarily reviewed a complimentary copy from Covenant Communications. All opinions are my own.

BackCover Blurb:
In the early days of World War II, the Lang family lost everything. Eighty years later, it’s time to take it back.

The Nazis have taken control of Austria, and wealthy widower Leopold Lang faces a difficult decision: join the ranks of the foreign power that has taken over his homeland or flee with his children to safety. Leopold makes his choice—but too late. His family is ripped apart, never to be reunited. But decades later, fate brings together the descendants of this broken dynasty in the place where it all began—Falcon Point.

Anna, Cole, and Tess have never met, each relying on fractured pieces of information to understand their Austrian heritage. But when unforeseen opportunities draw these Lang cousins to Falcon Point, they soon discover they are not alone in their quest to claim the coveted property and the fabled treasure hidden within. Unfortunately, another claimant, one with a much darker heritage, is determined to eliminate the Lang family once and for all.