THE GOLD IN THESE HILLS by Joanne Bischof, Reviewed by Rebecca Maney 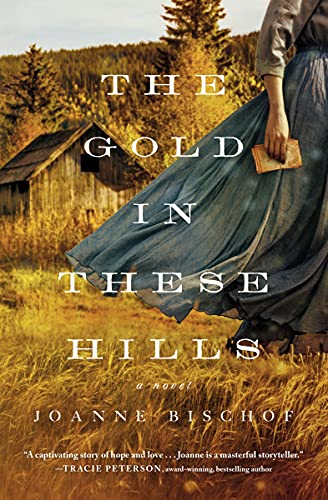 "We search and we ask because it matters. Because history, without understanding the hearts of the people who made it, is just a bunch of dates. Let us change the course of that wind. Let us teach the next generations what it is that truly matters."

Often the tales that generate the deepest emotions are the ones that have already plunged deep into the hearts and minds of those who have gone before us. Such is the story of a California ghost town, one that began with the highest of hopes and ended with the greatest of disappointments . . .  except for the resilience of a few . . . and it's their stories that prove to be Kenworthy's greatest treasures.

Juniper's Cohen's husband is gone. There is no gold in Kenworthy, the mine has closed, and nearly all of the town's inhabitants have traversed down the mountain; excepting Juniper, her young daughter, Edie Manchester and her very ill father, the local school teacher, and a smattering of other residents. Hopes? Dreams? Those are occasionally captured by the words that Juniper still scribes to her husband, but has no way of sending.

Johnny Sutherland's future as a single dad is apparently going to begin with restoring a hundred-year old farmhouse on property that used to be part of a gold mining town named Kenworthy. His main goal is to keep moving forward out of his heartache, and to provide an oasis of adventure for his two young children when they are allowed visitation. But there's more to these historic acres than meets the eye. They are part of a story that comes knocking on Johnny's front door, "Keep thou my feet; I do not ask to see. Lead, kindly light".

'They say there is no gold in these hills. But . . . "
*I purchased a copy and was under no obligation to provide a positive review. 4.5 starsBackCover Blurb:
One wild and mysterious ghost town. Two second-chance love stories. And the century-old legacy that binds them together.

Upon arriving in Kenworthy, California, mail-order bride Juniper Cohen is met by the pounding of the gold mine, an untamable landscape, and her greatest surprise of all: the kind and loving man who awaits her. But when the mine proves empty of profit, and when Juniper’s husband, John, vanishes, Juniper is left to fend for herself and her young daughter in the dwindling boomtown that is now her home.

Juniper pens letters to her husband but fears she is waiting on a ghost. Perhaps worse, rumors abound claiming the man she loves could be an outlaw. Surviving in a ghost town requires trusting the kindness of a few remaining souls, including the one who can unlock the mystery of her husband’s disappearance—and Juniper’s survival depends not only upon these friends but also the strength of heart she must fight to maintain.

Present day. Trying to escape the heartache of his failed marriage, Johnny Sutherland throws himself into raising his children and restoring a hundred-year-old abandoned farmhouse in what was once known as Kenworthy, California, in the San Jacinto Mountains. While exploring its secrets he uncovers Juniper’s letters and is moved by the handwritten accounts that bear his name—and as a love story from the past touches his own world, Johnny might discover yet that hope and resilience go hand in hand.

With The Gold in These Hills, acclaimed and beloved author Joanne Bischof returns with an absorbing masterpiece of faith, perseverance, and love that changes the course of history.