UNDER THE WEEPING WILLOW by Jenny Knipfer, Reviewed by Paula Shreckhise #ReleaseDay 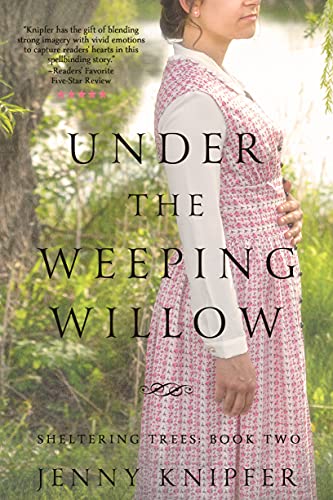 I was interested in reading this book after having read the first in the series because I lived in the north woods of Wisconsin for 11 years.

The story was captivating for me because it dealt with depression and how it was handled in the early 1900s. It alternated between Robin, who gave birth in 1918 and her daughter Enid who was written from a 1980s perspective. My mother, who wore Chanel No. 5, was born in 1917, so this was a point of connection for me. She lived to be 101 and was in a nursing home at the end.

The author dealt with some hard issues: attempted suicide, living in an asylum and coping with a loved one with Alzheimers. Some heavy subjects that had me in tears at times but the author handled them with sensitivity. The main emphasis was the relationship between mother and daughter and how each had wished for a closer connection, finally finding forgiveness and resolution.

Daughter Enid: “One of the things Mom’s journey with dementia has taught me is this: Life is in the small things, like the word AMEN- a simple agreement, a yes to words prayed, and a statement claiming the promises of God.”

Mother Robin: “One thing that helps me: the Lord promises to be with me no matter what my journey looks like. No matter if I can’t remember where I an or who I am. He’ll know, and that will have to be enough.”

So much resonated with me through the ups and downs of this poignant story. I look forward to book three in this series.

*I received a complimentary copy of this ebook from the author. I was not required to give a favorable review. All opinions are my own.*5 stars and a strong faith thread

BackCover Blurb:
A HISTORICAL NOVEL ABOUT A MOTHER AND DAUGHTER AND THE SECRET SHAPING THEIR ROCKY RELATIONSHIP

1918:
Just as Robin Holcomb settles into married life with her husband, Willis, on his aunt and uncle’s farm in Wisconsin, WWI calls Willis away. With an unknown future and a child on the way, Robin makes the best of life among people she barely knows.

After the birth of her child, Robin struggles with depression and battles to overcome her inner demons before despair and hopelessness drive her to attempt to take her own life. Will Robin survive her dive into postpartum depression, let alone see Willis again?

1983:
Enid Fenton clears out her Mother’s house and puts the family farm up for sale, trying to not be consumed by guilt for installing her mother into the county nursing home.

Reading through some of her mother’s diary entries, Enid uncovers a secret that helps her make sense of the unnamed point of division that has always soured their relationship.

Can Enid reconcile with her mother before the ravages of Alzheimer’s claim her?