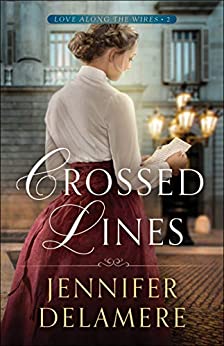 There was a time when Mitchell Harris would have been in agreement with his friend's assessment of the proverbial "love triangle". "But that was before Emma Sutton came into his life." Full of sunlight on her face, and sincerity within her heart, the woman was simply intoxicating. Such a pity that she had caught the eye of his best friend. Such a pity indeed. For heaven's sake, she had given him a plant!

Emma Sutton had found a new friend, and male friends were hard to come by in London. But it was her friend's friend whom she supposed herself in love with . . .  well, maybe not love yet, but at least she was moving towards the life she had always dreamed about. And it was a good thing, because her future was becoming more and more uncertain. But if Christopher Newman was truly as eloquent and romantic as the words of his letters indicated that he was, then surely he was the answer to her prayers.

"It's important not to have a cross, which is when two wire are in contact, so that one cannot be worked without interfering with the other." Ever the engineer, Christopher had been talking about telegraph wires, but in essence it was the story of Mitchell's life. Would he ever finish that poem?

Clever, well-written, and as engaging as its characters, "Crossed Lines" was a delightful, poetic, romantic reading experience!

SEE REVIEWS from Winnie and Paula

BackCover Blurb:
When romance finally blossoms in her life, will it grow in the right direction?

Emma Sutton knows she should be satisfied with her life. She has a position at London's Central Telegraph Office, and behind her rented rooms is a small plot where she can indulge her passion for gardening. But ever since she was orphaned as a child, she has longed for a family of her own and the stability and consistency it provides. Her deepest wish appears realized when a handsome engineer is thrown into her orbit and sends her a thrilling love note.

Mitchell Harris's sharp wit and facility with a pen have enabled him to thrive despite serious obstacles. That the woman of his dreams works just two floors above his should make life perfect. But a childhood accident has left Mitchell convinced he'll never draw a woman's affection, especially from someone like Emma. When his best friend--who once saved his life--falls in love with Emma too and asks for help writing her love letters, Mitchell must choose between desire and loyalty.